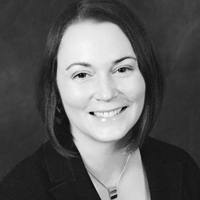 Brooke V. Townsend, AuD began working for ReSound in September 2006 as a Government Services Outside Account Manager covering the South territory. In 2010, she transitioned to a technical support role and launched the ReSound TeleAssist program for Government Services. Brooke soon became responsible for creating training materials for the ReSound Key Accounts Department. In December of 2013, Brooke joined the ReSound Marketing Department as the Content Development Audiologist. Current duties include developing training materials, overseeing ReSound’s Audiology Online and eLearning initiatives and assisting on training and audiologically based marketing projects. Brooke graduated with highest honors from the University of Florida in 1997 with a BA in Communication Disorders. She then received her AuD from Central Michigan University in 2001. Immediately following graduate school, Brooke worked as a clinical audiologist for an otololaryngology practice in Florida where her duties included clinical audiology, special testing, hearing aid dispensing and counseling.