Dr. Paul Dybala: Hello, this is Dr. Paul Dybala with Audiology Online, and I'm here conducting interviews regarding the Starkey Hearing Foundation's "Don't Say What" (www.dontsaywhat.org) hearing loss prevention campaign. The foundation has partnered with USA Today, three-time Grammy winner Tricia Yearwood, and leading audiologist Dr. Gyl Kasewurm. I am lucky enough to be able to spend a little time with Mr. Austin and Dr. Kasewurm to find out more about this program. Bill, let me start with you. Give us a little background on this campaign.

Bill Austin: Thank you, Paul. I am really pleased to be talking to you about this today, as this new campaign is going to really work to educate people about the condition of hearing loss due to noise exposure. I have had the good fortune, through my work with the Starkey Hearing Foundation, to really help a lot of people who have hearing problems, and some of these people are well-known celebrities. They know what it is to have lost their hearing, and they're willing to speak out about it and try to bring attention to this important area. We want to promote that hearing loss isn't something you need to hide. It isn't something you need to be embarrassed about. These celebrity role models will certainly show that. There should be no stigma about hearing, anymore than exists with visual issues. If you need glasses you get a pair. If you need hearing, you take care of it. It's no big deal.

I think what will help more than anything, is to have a number of well known people speaking out about hearing, and about the issue of taking care of your hearing.

Dybala: I mentioned earlier that with this campaign, The Starkey Hearing Foundation is partnering with Trisha Yearwood and USA Today. Could you tell us more about their involvement?

Austin: Tricia has been active with The Starkey Hearing Foundation for a few years and has also participated in our missions to fit underprivileged children in various parts of the world and the United States with hearing aids. She is a great example of how we want to use some of our celebrity friends to help spread the word about preventing hearing loss and being aware of exposure to noise. We picked the name "Don't Say What" as it is a simple way to remind people that they are often in situations where the noise is too loud. If you have to say "What?" to hear a person in a noisy room, then it's likely that the noise is too loud.

USA Today is a great partner, as they are not only helping us with the media exposure, but they are working with us to develop an educational program that talks about the causes of hearing loss and the best way to protect you ears. This program will reach 30,000 elementary, middle, and high school classrooms and 400 universities across the country. 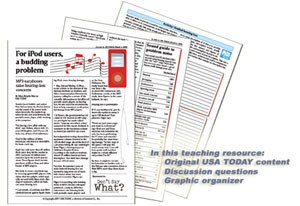 Dybala: Bill, that is impressive, and thank you for all the work that you have done in this area.

Dybala: I had also mentioned that the Starkey Hearing Foundation would be partnering with audiologist Dr. Gyl Kasewurm to help promote this program, and we have her here as well. Welcome, Gyl!

Dybala: Gyl, why did you decide to get involved with the "Don't Say What?" campaign?

Kasewurm: You know, in my practice, I've worked with all different ages of people, and I'm very excited to be able to participate in a campaign to educate consumers on how to protect their hearing.

Dybala: Gyl, one of the things that has been in the news lately is lots of talk about the MP3 players that can be played at a high volume level for a longer period of time than traditional CD or tape players. I have even heard people refer to it as "iPod ear". Can you give us a little background on this?

Kasewurm: Well, people don't really think about that when they put something in their ear and listen to music at varying loudness levels for a long period of time, that can cause significant hearing damage. One has to remember the human element in all of this. I just love it, Paul, when people say that iPods cause hearing loss. iPods don't cause hearing loss. It's the users of the iPods that cause hearing loss. This is why the educational part of the "Don't Say What?" campaign is so important. We not only want to educate the children, but the parents as well. Parents need to take a proactive approach to monitoring the levels that their kids listen to their personal stereos.

Dybala: What is a good rule of thumb for parents?

Kasewurm: If your child is wearing headphones and you can hear the sound from 3 feet away, the level is way too loud. Also, just like Bill said, if you have to say "What?" when talking to your child in their room due to the level of a stereo, it is too loud.

Dybala: Gyl, the other thing that people may not be aware of is the phenomenon of "getting used to the loudness levels". Can you touch on that?

Kasewurm: Yes, and thank you for asking that question. Many people will say that loud sounds are not that bad, as you can typically get used to the loudness. What they do not realize is that what is occuring is a temporary hearing loss. This is a real measureable effect. Many times, the hearing will recover, but sometimes it will not, and the person is left with a permanent hearing loss, and we do not want that to happen.

Dybala: Great information, Gyl. I appreciate you taking the time to fill us in about this campaign from the audiologist's standpoint.

Kasewurm: I'm really excited about this campaign, because there's definitely a growing need to educate consumers on how important our hearing is. We only get one set of ears, and we need to protect them because once you lose it, you never get it back. We have more information about hearing loss facts and figures on the campaign web site at www.dontsaywhat.org - I encourage everyone to take a look.

About the Starkey Hearing Foundation

Every year, the Foundation conducts more than 150 missions in countries across the globe. These missions include giving away hearing instruments and promoting hearing impairment education. Since 2000, the Starkey Hearing Foundation has touched more than 200,000 lives worldwide, delivering more than 20,000 hearing aids annually all around the world in countries stretching from the U.S. to Vietnam. The Foundation's work is sustained by the efforts of thousands of volunteers and donors around the world. Besides giving the gift of hearing, the Foundation promotes hearing health awareness while supporting research and education.

More information can be found at www.sotheworldmayhear.org or on the Starkey Web Channel on Audiology Online at www.audiologyonline.com/channels/starkey.asp 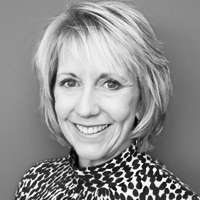 Well known speaker and established entrepreneur, Dr. Gyl Kasewurm operates one of the most unique audiology practices in the country. Kasewurm started Professional Hearing Services (PHS) in Saint Joseph, Michigan immediately following graduation from Western Michigan with a Masters Degree in Audiology twenty seven years ago. She then went on to earn her Doctor of Audiology Degree from Central Michigan University. Dr. Kasewurm’s practice was recognized as a standout and featured on a PBS documentary sponsored by the Better Hearing Institute in 2006. Dr. Kasewurm is a Past President of the Michigan Academy of Audiology and served on the American Academy of Audiology Executive Board for five years. In addition, the American Academy of Audiology honored Kasewurm for her innovation and contributions to the profession by presenting her with a Distinguished Achievement Award in 2007. no financial interest