Use of the Phonak DECT CP1 cordless phone improves the average speech reception threshold (SRT) by 9 dB compared to use of a standard phone. Subjective client satisfaction with the Phonak DECT phone is significantly higher than with a standard phone. These improvements can be attributed to receiving the phone signal in both ears as opposed to just one, the attenuation of the background noise and the easier positioning of the phone receiver. 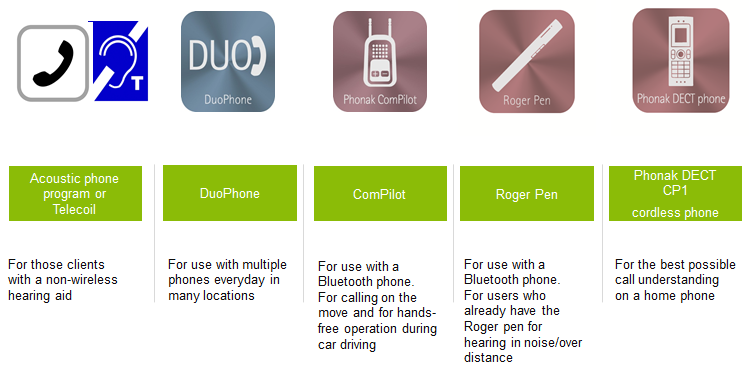 Figure 1. Phonak solutions for hearing on the phone. Different solutions are available depending on individual client needs.

With the DuoPhone feature from Phonak, the phone signal is picked up by one hearing aid (via the microphone or telecoil) and is streamed using the proprietary Binaural VoiceStream TechnologyTM to the hearing aid on the other ear. While streaming, the background noise is attenuated by 6 dB (the amount of attenuation can be adjusted). DuoPhone has been shown to improve speech intelligibility on the phone (Nyfeller, 2010). The strength of the DuoPhone solution is that is can be used with any phone, both mobile and landline, as long as the feature is available in the hearing aids. DuoPhone is available in many performance levels and models of newer generation hearing aids.

A streaming device, such as the Phonak ComPilot or the new Roger Pen, deliver the phone signal from a Bluetooth-enabled cell phone to both hearing aids simultaneously. Picou and Ricketts (2011; 2013) reported that speech intelligibility was significantly improved when hearing on the telephone via wireless streaming to both hearing aids by use of a remote interface device, in comparison to hearing the phone signal monaurally.

The new addition to the Phonak phone solutions is the DECT CP1 cordless phone. It is the ideal landline phone solution for home or small offices. This state-of-the-art cordless telephone streams the phone signal to both hearing aids and can be used with any wireless Phonak hearing aids from the CORE platform (launched after 2008) onward. It does not require Bluetooth or any additional streaming devices and is fully automatic (i.e., it does not require the user to change hearing aid programs). The default 6 dB hearing aid microphone attenuation can be adjusted by the hearing care professional if required. Additionally, the volume of the phone signal can be increased via a volume boost button on the DECT phone if desired. These features help users to hear on the phone even when background noise is present. The DECT CP1 cordless phone has the advantage that apart from the streaming function, it also has an acoustic output and can be used in the standard manner by people who do not wear hearing aids. Furthermore, it offers many features one would expect from a state-of-the-art cordless phone.

The objective of this study was to investigate whether use of the DECT CP1 cordless phone would result in improved speech intelligibility when compared with use of a standard phone in a situation with background noise. A second objective was to compare user satisfaction when using the DECT CP1 versus a standard phone.

Fifteen subjects with moderate-severe hearing loss took part in the study. Their average audiograms can be seen in figure 2. Subjects had a hearing loss of at least 45 dB HL in the low frequencies and an air-bone gap of not more than 10 dB HL. There were 7 male and 8 female subjects whose age ranged from 57 – 83 years. 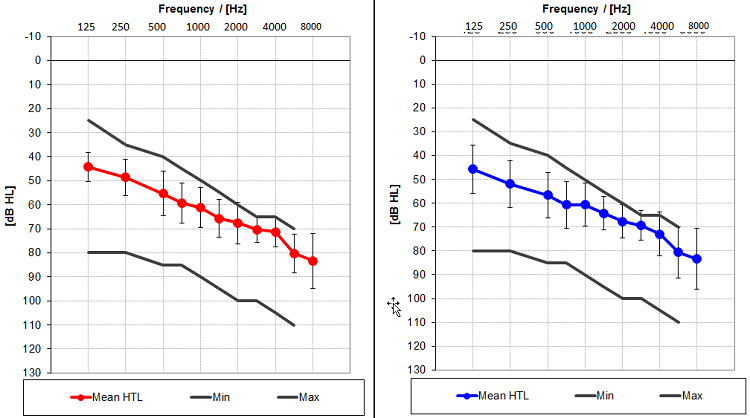 The study design consisted of two parts: a speech intelligibility test and a questionnaire. For the speech intelligibility test, subjects sat at the center of a circle as can be seen in figure 3. The subjects were surrounded by four speakers at angles of 45°, 135°, 225° and 315°. The speakers each produced the International Speech Test Signal (ISTS) with slightly different delays. This overlapping of the signal produced a diffuse speech-noise environment that changed in level depending on the subjects’ answers during the speech intelligibility test, in order to obtain an SRT of 50% correct digit recognition. This setup was selected to mimic the everyday-life situation when during a conversation at home with several people, the phone rings and the hearing aid user tries to make the phone call while the other people in the room continue their conversation. The speech test material used was the Triple-Digit-Test (TDT) (Zokoll et al. (2012; 2013)) that consists of spoken combinations of three digits. This speech material was presented to the subjects via the phone receiver (either a standard acoustic phone or the DECT CP1 phone). 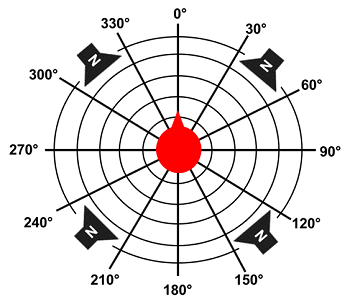 Figure 3. The test setup for the speech intelligibility test. Subjects were seated at the center of the circle surrounded by four speakers producing ISTS noise that adapted in level. Speech material was presented via the phone at a constant level of 65 dB (A).

Before commencing the speech intelligibility test, subjects initially listened to the demo recording of the phone in order to establish the most effective phone position for both phone conditions. They were then asked to type in the digit that they had heard via a touchscreen. They initially completed one training list, followed by testing with the standard phone and the DECT CP1 phone. The order in which these two phone conditions were tested was randomized. The speech material was calibrated using a Knowles Electronic Manikin for Acoustic Research (KEMAR) in order to present at a constant speech level of 65 dB (A).

Following the speech intelligibility tests, subjective user satisfaction scores were obtained. Subjects heard the TDT speech material again and filled out a questionnaire relating to their satisfaction for both phone conditions. The chosen level of presentation of noise and phone signal was dependent on the individual. The levels corresponding to the SRT for the individual subject were taken from the standard phone condition and then the noise level was increased by 3 dB. This was done in order to avoid ceiling effects for the DECT CP1 condition. The questionnaire judged listening effort, sound quality, loudness of speech and noise, effort to find the correct receiver position and overall impression for both the standard phone and for the DECT CP1 phone.

The results of the speech intelligibility test are summarized in figure 4. The median SRT with use of the standard phone was 5 dB and with use of the DECT CP1 cordless phone was -4 dB. This corresponds to an improvement in SRT of 9 dB when using the DECT CP1 cordless phone. The small variance shows that almost all participants had improved speech intelligibility scores regardless of the individual hearing loss. The result is statistically significant on the 0.005 significance level (Wilcoxon Test). 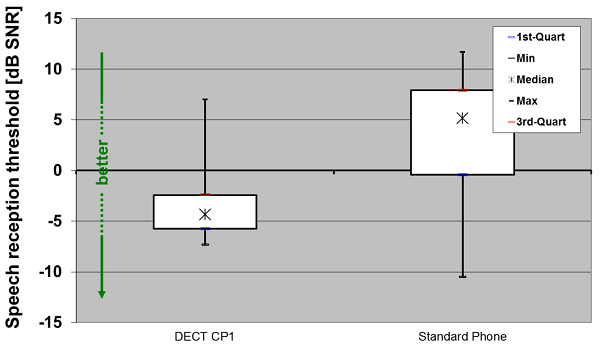 Figure 4. Speech reception thresholds for 50% correct digit recognition in adaptive noise with use of the acoustic phone and the wireless DECT CP1. The graph shows the median values of the SRT, the 1st and 3rd quartiles and the minimum and maximum values. 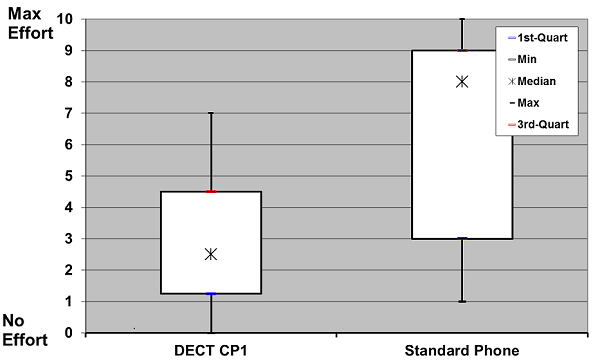 Figure 6 shows that sound quality was rated significantly better when using the DECT CP1 phone compared to the standard phone. 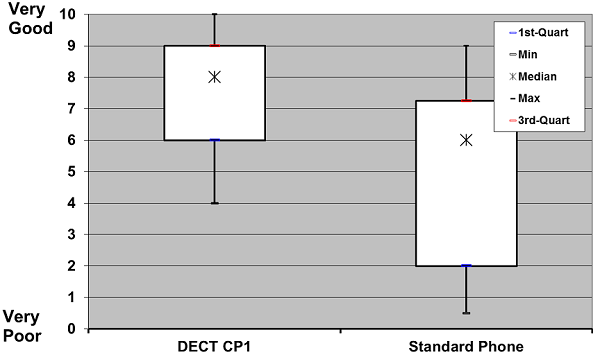 Figure 7 shows that the median perceived loudness of speech is “fair” for both phone conditions, but the variance of the loudness of speech for the standard phone is more in the direction of “too soft” compared to that for the DECT CP1 whose 3rd quartile and minimum lie only slightly below “fair”.

The better results for the dimensions listening effort, sound quality and loudness of speech for the DECT phone can be explained by users having no positioning problems (with the DECT phone, wireless streaming occurs as long as the phone is held within 25 cm of the hearing aids), hearing the phone signal in both ears and the attenuation of the background noise. The effective coupling of handset to receiver when using the DECT phone ensures efficient transmission of low-frequency components of speech. Other research has shown that as a consequence of effective transmission of low-frequencies, speech intelligibility and sound quality improve and listening effort drops (Picou & Ricketts, 2013; Latzel, 2001). 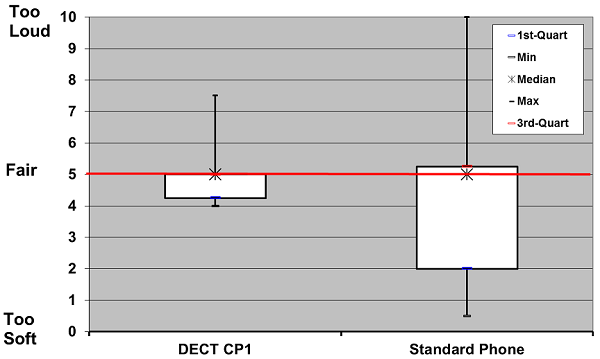 Figure 9 shows that finding the best receiver position for the optimum phone signal was rated as significantly less effort with the DECT CP1 phone than with the standard phone. Accurate positioning of a telephone receiver with hearing aids, when the hearing aid microphones are being used, is essential. This is the reason why particular precautions must be taken during research involving telephone communication in order to obtain reproducible results (Latzel, 2001). The result in figure 9 demonstrates this effect. In the case of the standard phone, the area of maximum sensitivity i.e., near the microphone, is very small and therefore more difficult to find. This accounts for the poor rating of the standard phone in figure 9. When using the DECT phone, this area of maximum sensitivity is fundamentally larger so that an optimal coupling of the speech signal is easier. 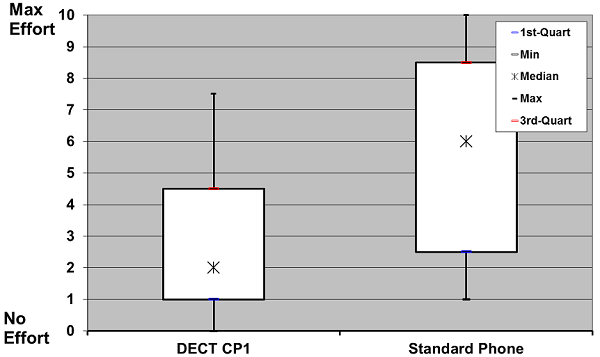 Figure 9. Subjective rating of effort to find correct listening position. Subjects were asked to rate the effort required to find a receiver position where they could hear well for both the DECT CP1 phone and for the standard phone on a scale of 0-10. The graph shows the median values of the rating of the effort to find the correct receiver position, the 1st and 3rd quartiles and the minimum and maximum values.

Figure 10 shows that subjects rated their overall impression of the DECT CP1 phone as significantly better than the standard phone. This can be attributed to very low listening effort, better sound quality and loudness of speech. A recent study showed that the DECT CP1 is also very easy to use (Stuermann, 2013). 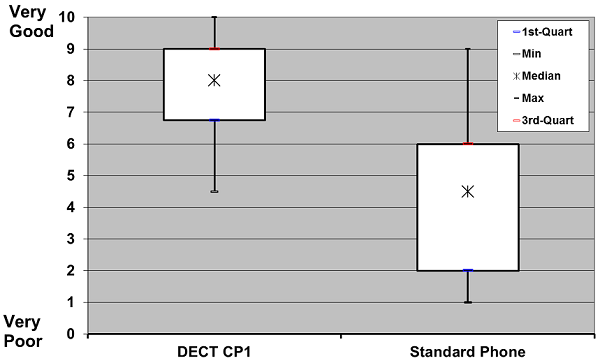 Figure 10. Subjective rating of overall impression. Subjects were asked to rate their overall impression of both the DECT CP1 phone and the standard phone on a scale of 0-10. The graph shows the median values of the overall rating, the 1st and 3rd quartiles and the minimum and maximum values.

Use of the Phonak DECT CP1 cordless phone resulted in a highly significant 9 dB improvement in the median SRT compared to use of a standard phone. Questionnaires revealed that subjects rated the DECT phone as significantly better than the standard phone in the domains of listening effort, sound quality, effort to find the best receiver position and overall impression.

Kochkin (2010) has shown that overall satisfaction with hearing aids is dependent on the number of listening situations in which the hearing aids are found to be beneficial. The DECT CP1 cordless phone has been proven both objectively and subjectively to be significantly beneficial to hearing aid wearers. Conquering this difficult listening situation is an important step to increasing overall satisfaction with amplification.

Picou E, Ricketts T (2013) Efficacy of Hearing-Aid Based Telephone Strategies for Listeners with Moderate-to-Severe Hearing Loss. Journal of the American Academy of Audiology, 24:59-70 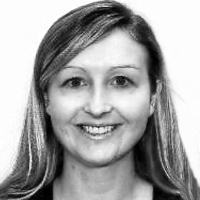 Jennifer Appleton-Huber, MSc, is an audiology manager at Phonak headquarters in Stäfa, Switzerland. 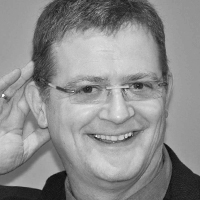 1 https://www.audiologyonline.com/audiology-ceus/course/listening-effort-and-eeg-as-32438 Listening Effort and EEG as Measures of Performance of Modern Hearing Aid Algorithms The objective of the course is to learn about the usage of EEG as a tool to evaluate hearing aids and their effect on listening effort. This course focuses on a function developed to improve speech perception when using a telephone based on a binaural approach. textual, visual

4 151
151 Reviews
AAA/0.2 Advanced; ACAud/2.0; BAA/2.0; CAA/2.0; IACET/0.2; IHS/2.0; Kansas, LTS-S0035/2.0; NZAS/2.0; SAC/2.0
View CEUs/Hours Offered
The objective of the course is to learn about the usage of EEG as a tool to assess changes in listening effort by comparing different spatial noise processing algorithms.
Course Details
3 https://www.audiologyonline.com/audiology-ceus/course/rogerpedia-36871 Rogerpedia Roger is a remote microphone technology using proprietary signal processing, such as adaptive gain and multibeam, to help create an enhanced sound experience for hearing in background noise. This presentation will cover the development of Roger, the various types of microphones that are available, and real world applications. auditory, textual, visual

4 148
148 Reviews
AAA/0.1 Intermediate; ACAud/1.0; BAA/1.0; CAA/1.0; IACET/0.1; IHS/1.0; Kansas, LTS-S0035/1.0; NZAS/1.0; SAC/1.0
View CEUs/Hours Offered
Although remote microphone systems are primarily recommended for use in school settings, recent studies have shown potential benefits related to their use in the home environment. Information from these studies will be presented.
Course Details