Direct-to-consumer hearing devices have become popular in recent days. This talk will present a summary of literature review on applications of direct-to-consumer hearing devices for adults with hearing loss. The summary is presented on three themes, including: (1) personal sound amplification products (PSAPs); (2) direct-mail hearing aids; and (3) over-the-counter (OTC) hearing aids.

Please note: You may earn ABA Tier 1 credits for this course if you complete it as part of the course 29916, "Navigating the Risks and Rewards of Non-Custom Amplification Devices." Course 29916 contains recordings of all five events from our 2017 PSAP series. ABA Tier 1 CEUs can be earned only when all modules are completed as part of course 29916. 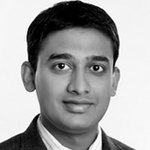 Vinaya Manchaiah, Au.D., MBA, Ph.D., is based in the Department of Speech and Hearing Sciences, Lamar University, Beaumont, Texas, USA and hold the following positions: Director of Audiology, Jo Mayo Endowed Professor and Associate Professor of Audiology. Dr. Manchaiah has worked in various clinical, teaching, research and administrative roles. He has served as the Board of Director of British Academy of Audiology and the President of an NGO – Audiology India, which he co-founded. His main research interest is in adult Audiologic rehabilitation. He has over 75 peer-reviewed publications.