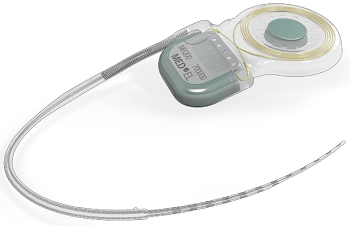 SYNCHRONY is the first and only cochlear implant approved for 3.0T MRI without magnet removal.

January 23,  2015 – (DURHAM, NC)  - MED-EL USA announced today that the U.S. Food and Drug Administration has approved the new SYNCHRONY cochlear implant. For the first time, a cochlear implant has been approved for use with 3.0 Tesla (T) MRI without the surgical removal of the internal magnet; it is the only implant available with this indication in the USA. SYNCHRONY will be available in spring 2015.

“MED-EL has continued its unprecedented advancement in the area of cochlear implant and MRI safety,” said Raymond Gamble, President & CEO, MED-EL North America. “We are thrilled to be able to offer SYNCHRONY, which has revolutionized the cochlear implant landscape around the world, here in the United States.”

SYNCHRONY is compatible with all current MED-EL audio processors, including the recently approved SONNET. Like all MED-EL implants, it is designed to be future ready for the latest technology as it becomes available. It is the smallest and lightest titanium cochlear implant on the market, making it the ideal choice for even the youngest candidates.

Magnetic resonance imaging (MRI) is a technique that uses a magnetic field and radio waves to create detailed images of the organs and tissues within the body. During an MRI, SYNCHRONY’s magnet freely rotates and self-aligns within its titanium housing, greatly reducing implant torque and the risk of demagnetization during MRI scans. This design enables high-resolution 3.0T MRI scans without the need for magnet removal.

The revolutionary conical design of the removable magnet housing greatly reduces the risk of magnet dislocation or migration. The implant features a polymer stiffening ring within the silicone implant body to further secure the magnet housing. Additionally, the magnet can only be removed from the bottom side of the implant, making dislocation of the magnet due to trauma almost impossible.

The implant is MR Conditional allowing MRI scans at 3.0T with the magnet in place. SYNCHRONY’s magnet housing can also be substituted with a non-magnetic spacer for MRI head scans with minimal image distortion in the implant area. The removable magnet housing features a protective coating to prevent unwanted cellular adhesion, simplifying the removal and replacement of the implant magnet. The incision for magnet exchange is made beside the implant, rather than directly over the implant, allowing uninterrupted hearing.

MED-EL Medical Electronics is a leading provider of hearing implant systems worldwide. The company was founded by Austrian scientists and industry pioneers Ingeborg and Erwin Hochmair, who together developed the world’s first microelectronic, multichannel cochlear implant in 1977. The cochlear implant was and remains the first replacement of a human sense, the sense of hearing. In 1990, the Hochmairs laid the foundation for the successful growth of the company when they hired their first employees. In 2013, Ingeborg was awarded the prestigiousLasker-DeBakey Clinical Medical Research Award in recognition of her contributions to the development of the modern cochlear implant. In 2015, the National Academy of Engineering awarded Ingeborg and Erwin the Russ Prize for their achievement in bioengineering. MED-EL is the only hearing implant manufacturer to have its founders and CEO hold this distinction. Today, the privately-held company has more than 1,500 employees around the world. Individuals in more than 100 countries enjoy the gift of hearing with a MED-EL Hearing Implant System.

MED-EL’s mission is to overcome hearing loss as a barrier to communication and quality of life. Globally, the company offers the widest range of implantable solutions worldwide to treat the various degrees of hearing loss, including cochlear, middle ear and bone conduction implant systems as well as a system for combined electric and acoustic stimulation. For more information, visit http://www.medel.com/us/ or the Med-El Expo Page on AudiologyOnline.