Study Reveals: Many Americans Decide Against a Treatment for Their Hearing Loss

Around half of the Americans have difficulty hearing but only 13 percent of those wear hearing aids.

Staefa, Switzerland, February 22, 2017​ - 45 percent of American respondents feel that they have difficulty hearing and 72 percent of those report that family members or friends have also commented about their poor hearing. However only 13 percent of those who think they suffer from hearing loss wear hearing aids. One reason, suggested by 89 percent of American respondents, is that they don’t want to publicly acknowledge their hearing loss. This and further facts were revealed in an international study, “How the world hears” by the Hear the World Foundation.

The ear is our most powerful sensory organ: Used 24 hours a day, the ear can recognize up to 400,000 sounds and process some 50 sensations every second – twice as many as our eyes do. Unfortunately, the ear’s importance is often neglected in our visually orientated word. By publishing the study “How the world hears”, the Hear the World Foundation aims to increase public awareness and emphasize the importance of good hearing while also sharing tips on how people can protect their hearing. 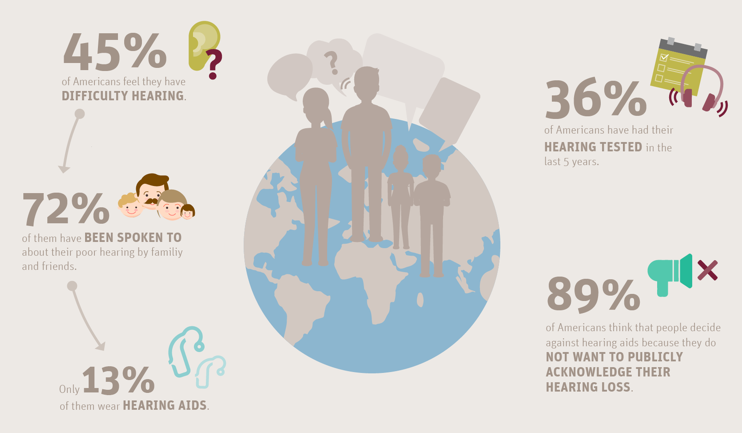 The most significant results for the US at a glance

These study results show that even when family and friends of someone with hearing loss notice and comment about their poor hearing, very few people decide to use hearing aids. „The process from initial awareness to treatment of a hearing loss requires time. Family members and friends can play an important role in it, by accompanying the person affected by hearing loss through the process. Our experience shows that people with hearing loss, who have the support of their their loved ones,  more often decide to wear hearing aids and are happier with this decision“, said Dr. Prof. Jerry L. Northern, Professor Emeritus at the University of Colorado School of Medicine and Advisory Board member of the Hear the World Foundation.

In addition to the person affected, family members and friends are benefiting from the decision to wear hearing aids, which is reflected in the Hear the World Foundation's study "Hearing is living". 78 percent of respondents wearing hearing aids said that the activities in the circle of friends have changed positively, and 73 percent say the relationship with their family members has improved since they are wearing hearing aids.

From September to November 2015, the market research organization Research Now asked 1,000 women and men aged between 16 and 55 in Germany, Switzerland, the USA, Brazil, and China about the issues of hearing and hearing loss for the “How the World Hears” study.