How Do I Determine Which Roger Combination is Right for My Student?

What are the differences in the Roger portfolio? Which one does my student need?

Phonak provides various Roger options and fitting the most apporiate combination is key to a student's success. Here we have the Roger microphone portfolio (Figure 1). On the far left, we have the Roger touchscreen mic. This is the primary microphone used in a school setting. That does not mean, however, that it cannot be used at home. It is the "Cadillac" of our microphones, with multiple scrolling pages, many functions, and three microphones. The Roger Pen is very popular with tweens and teens. It also has what we call an accelerometer; it can be laid on the table used in a multi-talker mode. On the far right is the very small Clip-on Mic. This is used a lot in home environments, and not as much in the classroom.

The third one from the left is the Roger Select which is about the size of a cookie. It is unique in that it has three microphones and six beamformers. With the Roger Select, you are able to select to whom you want to listen. There are six buttons, or areas that you can press on the top of the Roger Select to point it at whomever you want to hear the most. Alternatively, you could tap the middle button and it will go into an omni mode, where it will pick up everyone around you. It can also be worn on the lapel, or with a magnetic clip on the shirt. Because there are so many microphones, it doesn't matter if it slips or moves, or if the speaker's head turns. The beamformers are going to follow the speaker's voice, whether that be a teacher or a parent. Technically speaking, the Roger Touchscreen Mic is classified as "Roger for Education", and the other three are considered "Roger for Home". However, there can be a lot of crossover between use in those settings.

These are the Roger receivers (Figure 2). The 18, the 19, the Roger X and the Roger MyLink are all universal. Roger 21 is for MED-EL; Roger 20 is for Advanced Bionics; and Roger 17 is for Cochlear.

This Ask the Expert is an excerpt from Roger for Young Children. Learn more on the Phonak Expo Page on AudiologyOnline. 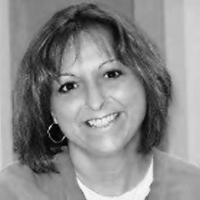 Rebekah F. Cunningham, PhD is the Pediatric Business Development Manager at Phonak, LLC, focusing on ensuring preschoolers experience Roger remote microphone technology. Previously, Dr. Cunningham was the Director for the Early Hearing Detection and Intervention (EHDI) Program at the Indiana State Department of Health, Department of Genomics and Newborn Screening. She was also formerly at Cardon Children's Medical Center Department of Audiology in Mesa, AZ, as well as an Associate Professor in the Department of Audiology at A.T. Still University (ATSU) for twelve years. Her passion has always been pediatric-focused, whether teaching/mentoring audiology students, providing services, or overseeing programs responsible for ensuring timely and appropriate newborn hearing screenings and follow up. She has served for more than 20 years on committees and task forces for local and national audiology organizations. Dr. Cunningham has taught, presented, and published on the topics of assessment and management of children with hearing loss and/or auditory processing difficulties.

1 https://www.audiologyonline.com/audiology-ceus/course/roger-for-young-children-30872 Roger for Young Children This course will provide research and resources to foster use of Roger technology for children with hearing loss in the 0-5 age range. auditory, textual, visual

Learn More
2 https://www.audiologyonline.com/audiology-ceus/course/using-roger-in-homes-children-32011 Using Roger in the Homes of Children with Hearing Loss Although remote microphone systems are primarily recommended for use in school settings, recent studies have shown potential benefits related to their use in the home environment. Information from these studies will be presented. auditory, textual, visual

4 148
'Interesting to see how using RM in the home can potentially benefit children with hearing loss'   Read Reviews
AAA/0.1 Intermediate; ACAud/1.0; BAA/1.0; CAA/1.0; IACET/0.1; IHS/1.0; Kansas, LTS-S0035/1.0; NZAS/1.0; SAC/1.0
View CEUs/Hours Offered
Although remote microphone systems are primarily recommended for use in school settings, recent studies have shown potential benefits related to their use in the home environment. Information from these studies will be presented.
Course Details

Learn More
3 https://www.audiologyonline.com/audiology-ceus/course/roger-for-education-solutions-dynamic-30745 Roger for Education: Solutions for Dynamic Classrooms This course will provide information about the selection, setup, compatibility, and proper utilization of the Roger for Education device portfolio. It will also highlight different use cases of the devices and troubleshooting techniques. auditory, textual, visual

Learn More
4 https://www.audiologyonline.com/audiology-ceus/course/state-education-for-students-with-36636 The State of Education for Students with Hearing Loss During the Pandemic Audiologists and school personnel serving students with hearing loss continue to face challenges during the COVID-19 pandemic due to dramatic changes to students’ learning environments and formats. Join Dr. Erin Schafer, of University of North Texas, to review key findings and the resulting recommendations to promote learning, engagement and educational access for K-12 students with hearing loss. auditory, textual, visual

Roger Technology: Solutions that Support Learning for All Students