Editor's note: This text-based course is a transcript of the webinar, Intra- and Post-Operative Electrocochleography in Cochlear Implants.

After this course learners will be able to:

Cochlear implants are considered a class three medical device that is used to restore hearing sensation and speech perception in patients who have varying degrees of hearing impairment. There are three approved cochlear implant manufacturers approved by the United States FDA whose devices are going to be implanted in patients, Advanced Bionics, Cochlear, and Med-EL. Each implant manufacturer has some type of a processor that goes behind the ear, or maybe all-in-one piece processor which includes a microphone. The processor uses a microphone to capture the sound from the listening environment. Then that sound is dubbed, goes through some signal processing chain, and the cable and coil, or the headpiece is communicated to the implant that is placed under the skin. The implant electronics then takes that signal and sends it to the auditory nerve using the electrode array that is placed inside the cochlea. 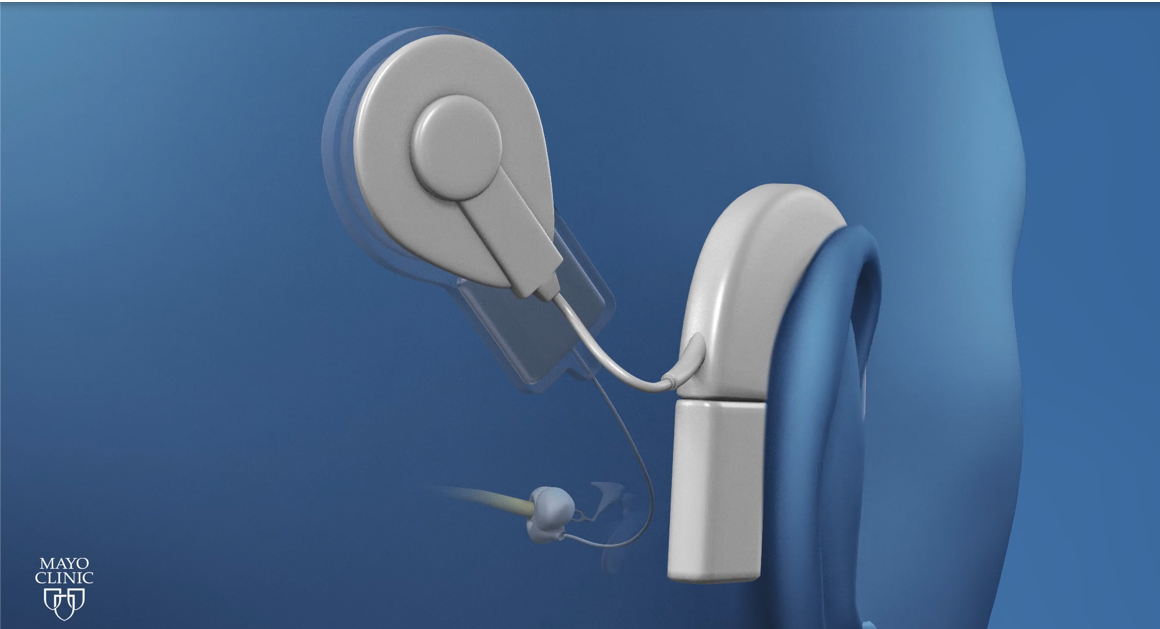 Loss of Residual Hearing During Implantation 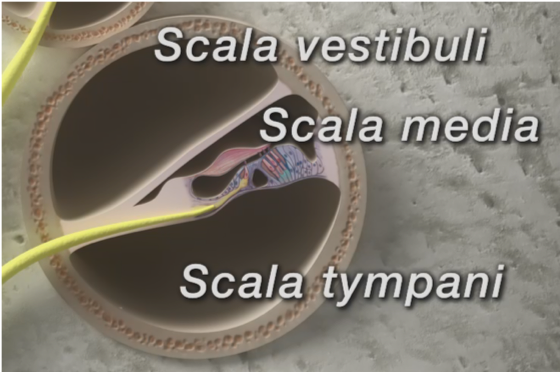 This is where the role of an audiologist becomes vital. Electrocochleography (ECOG) is a technique used to measure electrical potentials from the cochlea and auditory nerve. We can utilize this technique to possibly monitor cochlear trauma and guide electrode placement during cochlear implant surgery. During this course, we will go into depth about what is electrocochleography, what are the potentials we can measure using electrocochleography? How are these potentials measured during surgery? And how are they used to monitor implant electrode placement? Post-operatively we will also look into how these potentials can be used to rehabilitate patients with cochlear implants.

Stimulus. When we say we are going to use electrocochleography to measure electrical potentials, we first need to generate and record the potential. The electrical potential from the cochlear or the auditory nerve can be generated using a brief acoustic stimulus such as tone burst or clicks or an electrical stimulus like we routinely use during NRT, NRI, or ART measurement in cochlear implants. These are measurements we perform immediately after the electrode placement and also post-operatively to make sure that the electrical signal is reaching the auditory nerve.

When we present a stimulus during ECOG, depending on the type of stimulus and filtering mechanism employed, we can measure the following four evoked potentials:

SP and CAP are generally used to measure patients with Meniere's. Cochlear microphonics are assumed to be generated from the outer hair cells or mostly the hair cells and the supporting cells. Auditory nerve neurophonics, as the name indicates, comes from the auditory nerve. The summating potentials come from the hair cells, and the compound action potential is from the auditory nerve. One thing to remember is that the cochlear microphonic, ANN, and SP are the ongoing responses for the application in a cochlear implant. In other words, the stimulus and potential are presented and recorded at the same time.

Now let's discuss what we do during ECOG measurement as it relates to cochlear implants. During the ECOG measurement, we use an acoustic tone burst. Even though we are dealing with cochlear implants, we use an acoustic tone burst, and this is primarily done in patients who have some level of residential hearing in the ear that is going to be implanted.

Figure 3 shows a waveform representation of a 500 Hz stimulation with condensation polarity. This is a cochlear microphonic signal. We are presenting this sinusoidal stimulus, and at the same time, we are recording an evoked potential from the cochlea. In this case, the cochlear microphonic looks the same as that of the stimulus and is shown in green. 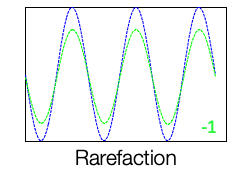 We use an alternating polarity. That is, we go back and forth between condensation and rarefaction polarity, and we keep doing this while acquiring the stimulus. If we decide to add the evoked potential measured during the condensation phase and the rarefaction phase, it will cancel out. They cancel, and we get a flat line, that is, we do not get any response shown in Figure 5. 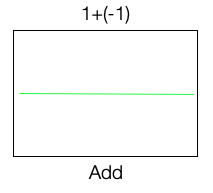 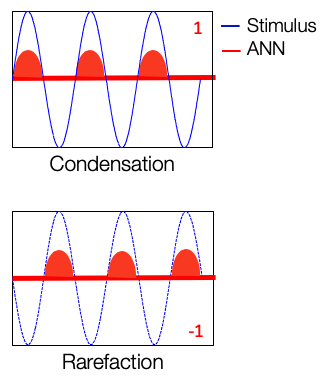 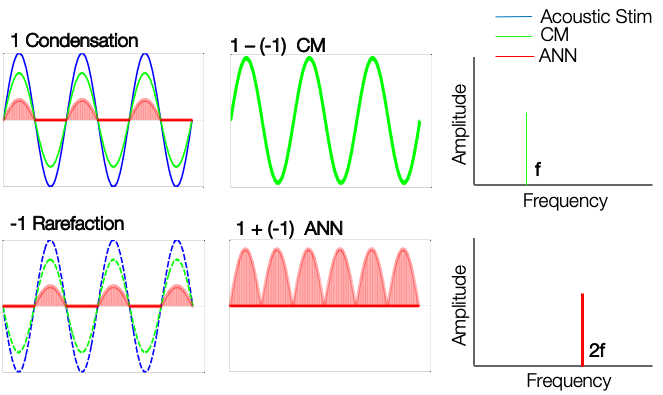 In a patient who has significant residual, low-frequency hearing, for example, we can present a 500 Hz stimulus at a somewhat loud level. That stimulus is going to stimulate the apical region of 500 Hz inside the cochlea. That stimulus is going to generate cochlear microphonics. Cochlear microphonics is generated from the outer hair cells, so we measure the signal using the cochlear implant electrodes. How do we do that? The array of electrodes at the most apical region will be the recording electrode, and the case is used as the ground electrode. We record the responses between the active electrode and the ground electrode. Similarly, we record the responses within the active electrode and the case electrode. In cochlear implants, we do not use surface electrodes to perform electrocochleography because we want to do this during surgery. So we use the implant electronics as the recording electrodes and the other electrode as the ground electrode.

What does this all look like in the operating room? Without going too much into detail, I thought I'll give you a flowchart of how it's done shown in Figure 8. First, we have a tone generator. If you want to present a 500 Hz stimulus, we need a tone generator that is going to generate an acoustic tone burst, such as 500 Hz. That is going to be presented through an insert earphone tube into the ear canal. This tone generator is synchronized with software that is going to measure ECOG and do all the addition, subtraction, and display the cochlear microphonic amplitude. This electrocochleography software is connected to the POD or the CPI-3 processor and the cable, headpiece, and coil. This talks to the implant and captures the responses from the electrode array. 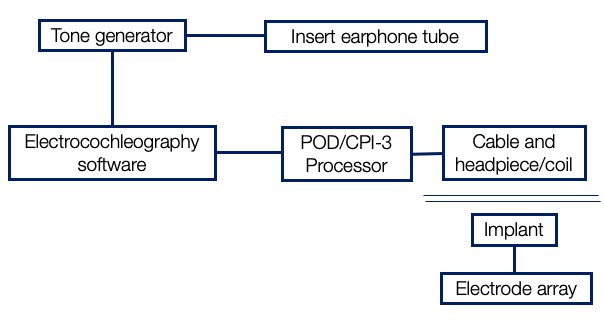 Insert earphone set-up. Figure 9 shows a typical insert earphone. The black stem of the insert earphone can be kinked, and that will prevent the 500 Hz stimulus from being delivered in the ear canal. It is essential to make sure that there is no kinking in the stem of this foam plug. Once we take this yellow foam plug and put it in the patient's ear canal, we cover the ear canal concha with something known as bone wax. We take this bone wax, and we cover it because, at some point, they are going to wash this whole region with betadine, and we don't want any liquid or betadine entering the ear canal. If there is fluid in the ear canal, our stimulus of 500 Hz will simply not make it to the tympanic membrane, and then we may not get any responses. 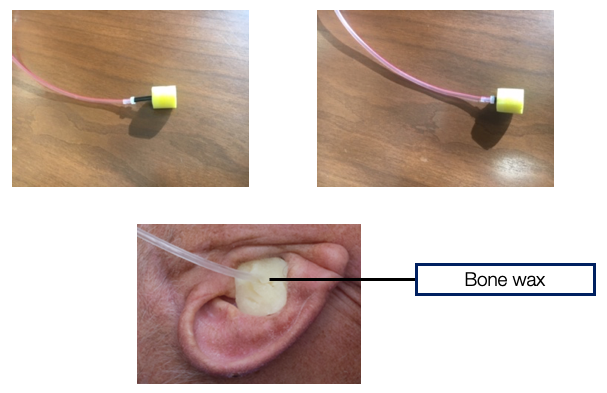 OR set-up. The surgeon is going to take the pinna and fold it over to place the electrode and measure cochlear microphonic suiting surgery shown in Figure 10. You can see the insert earphone tube, but you don't see the foam plug because it's in the ear canal and covered. The surgeon has done the facial recess, made a pocket, and placed the implant inside the pocket. The electrode array is about to be placed in the cochlea. Just before that happens, the coil and headpiece are put into a sterilized ultrasound sleeve that is shown in Figure 10. Then this coil is placed over the magnet. Our software has started talking with the implant so that when the most apically electrode is being placed, we can begin measuring cochlear microphonic. 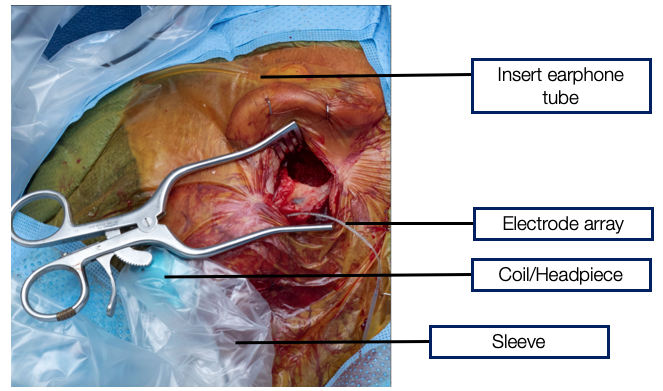 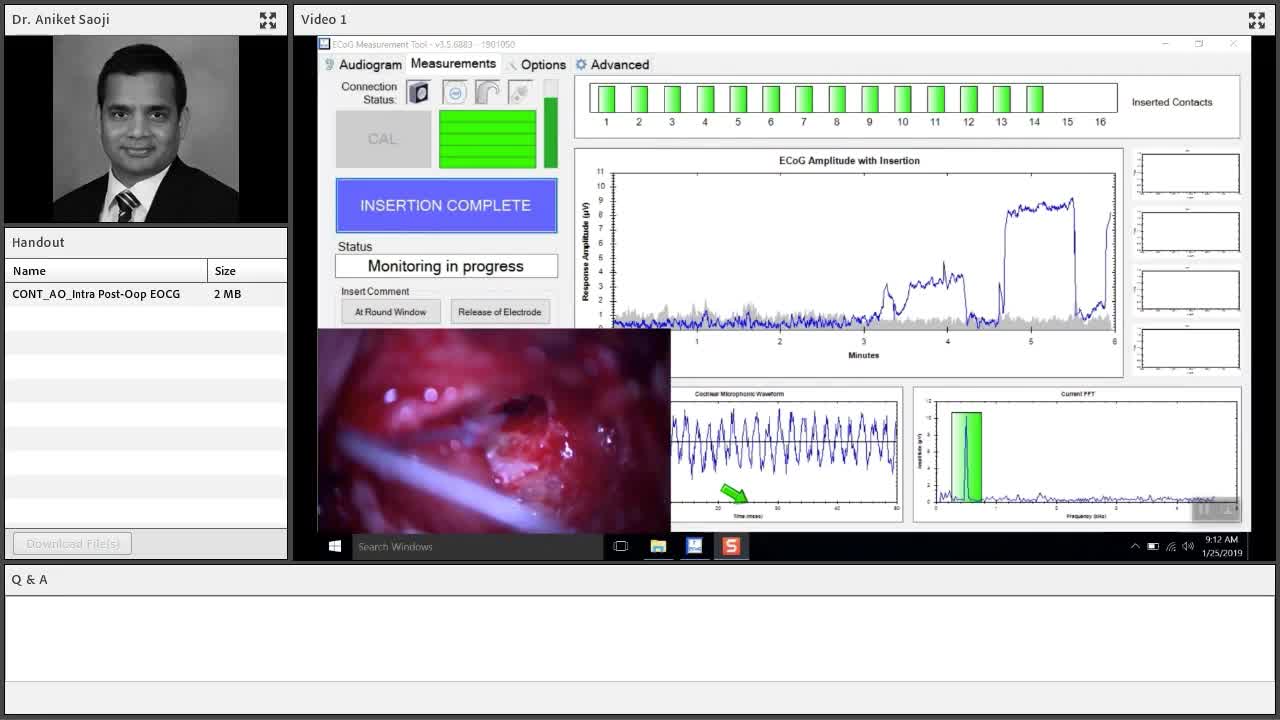 There are different ways of describing these patterns, and cochlear microphonic amplitude increases and decreases. What is significant? What is not significant? I don't think I'll be able to cover all of those things in today's presentation, but I thought I could point you to a couple of articles. These articles discuss how electrocochleography during placement of the electrode is predictive of the final scalar location. We want it to be in scala tympani and not the scala vestibuli. Also covered are the different patterns and what do those patterns of amplitude tracings mean when we are monitoring cochlear microphonic during cochlear implantation. Both of them are very nice articles and give us an in-depth understanding of how this can be used during surgery. 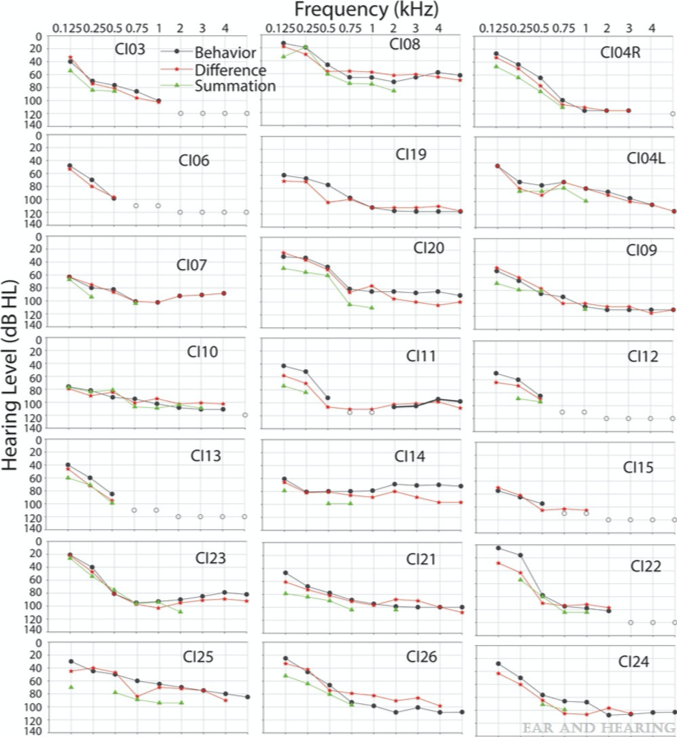 Remember, the difference between the two stimuli and responses for the two phases is the cochlear microphonic. There is a very high correlation between these measurements. I just wanted to show you how right after the electrode placement, we can measure an audiogram and how quickly and fast we can do that. We know that we can quickly measure an audiogram after surgery. Once a patient has cochlear implant surgery, they have lots of fluid in the middle ear anywhere between two weeks to six or eight weeks sometimes. If they have fluid, we cannot measure a good audiogram. Then we sometimes rely on bone conduction thresholds. There are some vibrotactile responses to consider in that case. Testing two or three months after surgery to get a good post-operative audiogram would be the best time. Certainly, we were able to preserve these thresholds during surgery, which possibly suggests that we did not cause much cochlear trauma. Although it's all an indirect measure, there is no way to visualize and confirm that. Because post-operatively, during the recovery phase, something goes wrong occasionally. Maybe inflammation, apoptosis, or some kind of a process that is going on that adversely affects hearing preservation.

Post-operative ECOG measurements can be used as an objective tool to:

We are now stimulating electrically as well as acoustical in the same ear. It is quite possible that we are going to have some interaction between the electric and acoustic stimulus that is presented simultaneously in that ear. Which is undesired, leads to distortion, and could potentially harm the ear. So if we can measure cochlear microphonic using acoustic stimulus and then measure the same cochlear microphonic again while we are presenting the electric stimulus, we can figure out electric and acoustic interaction. Again, this is a newly emerging tool, a new application of inner electrocochleography in cochlear implants. I think there are now a couple of publications that have tried to measure electric and acoustic interaction in the implanted ear. I have listed these in the references for you to find out more information. 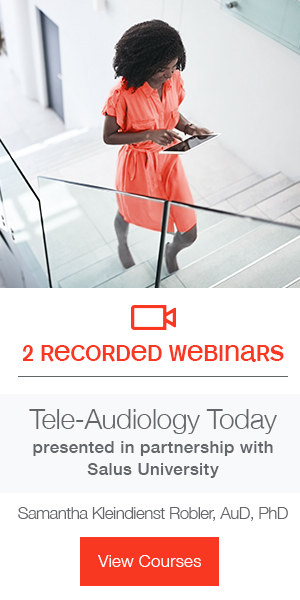 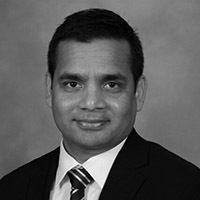 Aniket Saoji is the Director of Cochlear Implants at the Mayo Clinic located in Rochester, Minnesota. He got his PhD in Hearing Sciences, from the State University of New York in 2004. He got his Master of Science in Speech-Language Pathology and Audiology from All India Institute of Speech and Hearing in 1999.

Please note: You may earn ABA Tier 1 credits for this course if you complete it as part of the course 26683, "Advanced Management of Complex Cases." Course 26683 contains recordings of all three events from Advanced Bionic's 2015 series, Advanced Management of Complex Cases. ABA Tier 1 CEUs can be earned only when all modules are completed as part of course 26683.
Course Details
4 https://www.audiologyonline.com/audiology-ceus/course/advanced-management-of-complex-cases-26866 Advanced Management of Complex Cases This modular course explores various aspects of managing advanced cases involving children with cochlear implants. The first component discusses Usher Syndrome and its relevance to newly identified children and their families. The second section details diagnosis and audiologic treatment and rehabilitative options for children with enlarged vestibular aqueduct. The third section discusses caveats regarding cochlear implant candidacy in medically complex children. auditory, textual, visual