Universal Design Makes “Custom by ReSound” a Pleasure to Fit, Charge and Wear

Universal Design Makes “Custom by ReSound” a Pleasure to Fit, Charge and Wear

Join Now
Share:
Print
This article is sponsored by ReSound.

After this course, learners will be able to:

My grandmother was fit with hearing aids when she was in her 60’s, and she wore hearing aids successfully for over 30 years; in her 90s, she stopped wearing her hearing aids because she was no longer able to change the batteries and caregivers at the nursing home, where she lived the last years of her life, could not help with this task. It is not unusual that nursing home staff are untrained in the care and maintenance of hearing aids. Cohen-Mansfield and Taylor (2004) found that about half of the nursing home staff in their study, had no training in the care of hearing aids. Hearing aids require care to function properly and caring for hearing aids requires some knowledge. Examples of necessary knowledge include how to change wax filters, identifying the correct batteries, as well as removing and inserting batteries. The lack of nursing home staff trained to help residents with hearing aids means many residents are missing out on hearing. For my grandmother this meant missing out on conversation and going from being an outgoing person to withdrawing from interactions.

If my grandmother had gotten help maintaining her hearing aids and changing her batteries - or better yet, had rechargeable hearing aids that were easier to maintain - she might have been able to continue participating more actively at the nursing home. Studies indicate that easy handling matters more as we age (Meister et al., 2002). This is not surprising as handling hearing aids, both to change batteries and to troubleshoot problems, requires visual acuity and adequate dexterity (Solheim, 2017). Ease of use can make the difference between a successful and unsuccessful hearing aid user; it can also increase the hours of use (Solheim, 2017). Ease of use includes battery changes, placing aids in ears, and care and maintenance. McCormack and Fortnum (2013) reported that difficulty with battery change ranged from 4-62% in the studies included in their scoping review. The large range of reported difficulty is related to the inclusion criteria of each study’s participants. The study with the 62% rate of difficulty with battery changes was conducted in a nursing home (Cohen-Mansfield & Taylor, 2004). This study also found that 42% of participants had difficulty placing hearing aids in their ears.

Getting to Know the Hassles of Hearing Aids

One memorable interview was with an older person with low vision in addition to hearing loss. Her vision loss meant she could not see the color markers on her hearing aids that tell the user which is right, and which is left. To be sure that she did not mix up her right and left hearing aids she created labels that showed her where to place each hearing aid in the case when she took them off, as shown in Figure 1. A potential benefit of a charger in addition to not needing to change and manage batteries, could be providing right and left orientation. 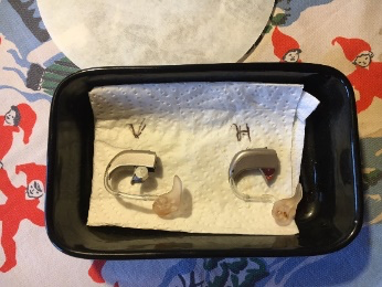 Figure 1. An interview participant with vision impairment showed her method for keeping track of right and left hearing aids when she was not wearing them. “V” stands for “venstre” and “H” for “højre”; left and right in Danish.

The Hardware Design group at GN Hearing created four prototype chargers, shown in Figure 2. These prototypes were tested by eight current hearing aid users. This may seem like very few participants to make design decisions; however, informative studies that focus on finding usability problems, small sample sizes with targeted users may be used to get an idea of what works and does not work before testing again. In these small studies, it is essential that participants are representative of the users and include people expected to have problems with the designs tested (Francik, 2015).

Figure 2. Mock-ups of the 4 charger designs that were tested: from left to right bowl, standing, hanging, and sideways.

The top two concepts, bowl and standing, were selected for improvement. The following changes were made based on the test results. 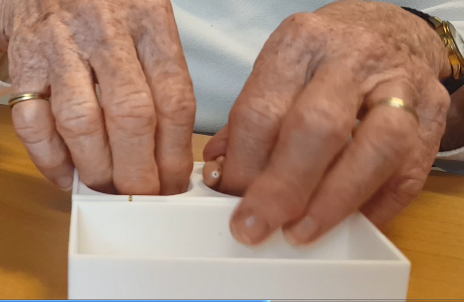 Several participants without dexterity issues speculated about which charger would be easier to use when or if they had poorer dexterity or for someone else with poorer dexterity. In these imagined scenarios, both prototypes were chosen. However, these imagined future selves and their predicted ease of use did not match up well with the results from the people with the greatest dexterity or vision loss problems included in the testing. This highlights the importance of including a diverse test group rather than just guessing how people with different abilities might perform tasks and what they might prefer.

Based on these results, the standing charger concept was chosen, despite the extra complexity and cost of designing and manufacturing it. The additional complexity and cost are due to custom-made ‘inserts’ for the hearing aids to be placed in for charging. This decision was made because it was best for users.

After the selection of the standing design, the implications of this design choice were considered. One of the considerations was that the custom-made insert had nooks and crannies where ear wax could get stuck. Studies indicate that most hearing aids are contaminated with at least one bacterium, and many have more than one, so cleaning hearing aids and inserts is essential to avoid infection (Sturgulewski, 2006; Ahmad, 2007).

These nine participants were also asked about preferences for two different LED placements that would indicate charging status (see Figure 4). Five participants preferred split-line placement, three did not have a preference, and one preferred on top. Participants preferred split-line because it was easier to see LEDs when placed on a shelf or on a bedside table and because the LEDs can be turned away, for example, from the bed to avoid disturbing lights while sleeping. 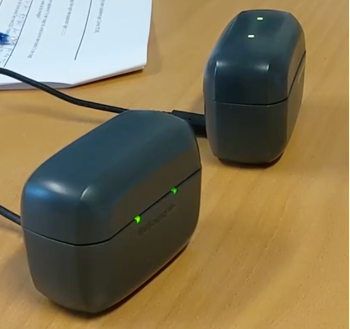 Figure 4. Examples of charger with LED located in the split-line (left) and on top (right).

The Custom by ReSound charger was developed in iterative process, meaning the design was tested many times. Final version is shown below in Figure 5. After each round of testing, the results were reviewed together with the design team and the design was updated to improve ease of use. After design updates were completed, the new design was retested to ensure the updated design worked. Diverse test participants, including people with reduced vision and dexterity, were included at all steps of this iterative process. Participants with reduced vision and dexterity are uniquely qualified to reveal design strengths and flaws and ensure a universal design is achieved. An example of a design strength revealed in testing is that the standing charger helped participants with reduced dexterity correctly place the hearing aids in their ears. The Custom by ReSound charger and hearing aid showcases the power of iterative testing and technological improvement to create a universal design that works well for all users. This charger allows users, like my grandmother, to become and to continue to be successful hearing aid users, even with reductions in vision and dexterity. For people with no visual impairments or dexterity problems this charger makes using hearing aids more hassle-free, which just might increase their wear time too. 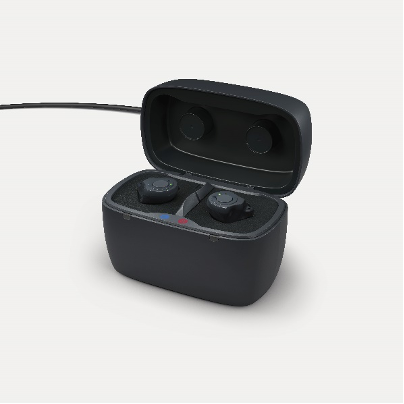 Lisa Sjolander is a lead audiologist with GN Hearing in the Global Audiology group based in Copenhagen, Denmark. She is particularly interested in the integration of new technology into easy to use, solutions for end users. She has an AuD. from Vanderbilt University.

1 https://www.audiologyonline.com/audiology-ceus/course/covid-and-masking-catch-22-38194 Covid and Masking, A Catch 22 This article provides insight in understanding the impact of COVID-19 on hearing impaired people. It describes changes in attitudes from 2021 to 2022. textual, visual

Covid and Masking, A Catch 22

Snapshot of the Impact of COVID-19 on People with Hearing Loss in Chicago, Illinois and Copenhagen, Denmark

5 127
127 Reviews
AAA/0.1 Intermediate; ACAud/1.0; AHIP/1.0; ASHA/0.1 Intermediate, Professional; BAA/1.0; CAA/1.0; IACET/0.1; IHS/1.0; Kansas, LTS-S0035/1.0; NZAS/1.0; SAC/1.0
View CEUs/Hours Offered
Research has shown the benefits of bimodal stimulation in structured clinical trials, but clinical patients may require programming outside of the standard fitting flow. This presentation will discuss bimodal fitting considerations for hearing aid fitting clinicians to help patients get the most of their bimodal stimulation.
Course Details
5 https://www.audiologyonline.com/audiology-ceus/course/resound-assist-everything-you-need-32280 ReSound Assist: Everything You Need to Know for Success Telehealth is a growing force in the hearing industry. Using ReSound Assist in your clinical practice will allow you to enter this new and upcoming space. Review these four training modules to learn all you need to know to get started with ReSound Assist. auditory, textual, visual

ReSound Assist: Everything You Need to Know for Success