The Clinical Importance and Use of Inter Module Communication

Maestro software, which controls the Trumpet, the Inventis REM system, is already IMC compliant. The compliance has been verified by testing Maestro software with Starkey - Inspire v. 2022.0.20033. Not only Starkey hearing aids! New expansions are planned!

AudiologyOnline: What is the IMC protocol?

Massimiliano Piatto: The IMC protocol, usually called "AutoREM" or similar, is a standard used to exchange data and commands between the software that controls a REM device (called "Server"), such as the Inventis Maestro which controls the Trumpet REM system, and the HA fitting software that controls the HA (called "Client"). The first revision of the protocol was introduced in 1999 by HIMSA, and the current revision is IMC2. The communication protocol can be used only between modules that are registered in Noah.

AudiologyOnline: Why is IMC so useful?

Massimiliano Piatto: Many hearing care professionals prefer not to perform REM measurements on the patients since they consider the procedure too long and difficult to perform. IMC allows to shorten and simplify the REM fitting process by far, thus making these measurements accessible to a wider range of operators and resulting in a great improvement of performance and comfort for the patients. In addition, by means of "AutoREM", it is possible to fit patients using the HA manufacturer's proprietary fitting rule.

AudiologyOnline: How does the “AutoREM” flow work?

Massimiliano Piatto: Each HA manufacturer is free to implement the IMC protocol in the way he prefers, but some key points can’t be missed (see Figure 1.) 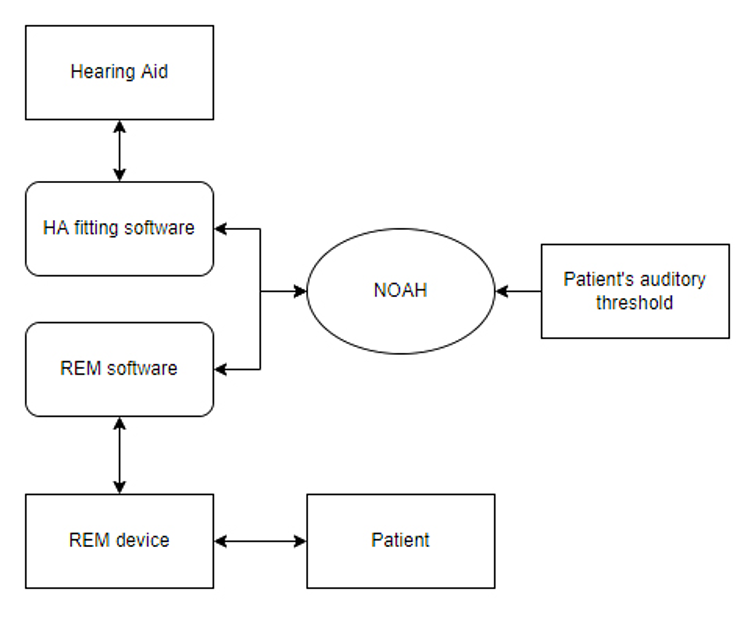 If the HA fitting software can directly control the REM device, such as the Inventis Trumpet, in order to emit the signals required for the fitting and receive the measured curves back, then the fitting software itself can modify the gain of the HA so that the recorded curves can be fitted to the desired target curves. This can be done by (almost) pressing one single button, instead of turning manually all the "knobs" of the frequency gain.

During the fitting phase (REAG), the HA fitting software receives the measured in-situ curves from the REM software and calculates the distance from the desired target curve for all the frequency points. Then, it sets the frequency gain of the HA in order to reduce that distance and it repeats the measurement.

This iterative process is concluded when the distance between the recorded curve and the target curve is under a specific tolerance: this usually takes 2 or 3 steps, and the entire procedure can last less than 5 minutes.

In some HA fitting software, it is possible to change the type and level of the signals used in all the steps, but the default configuration is usually fine.

AudiologyOnline: Is the hearing care professional work finished after pressing the "AutoREM" button?

Massimiliano Piatto: Not really. The “AutoREM” can ensure that the fitting in-situ was almost perfectly coherent with the selected fitting rule, but it is not a magic wand.

The validation of the fitting is paramount to ensure that the end user obtains what they wanted or required, not just in terms of addressing audibility and intelligibility but also—and more specifically—in terms of their perception of loudness. Validation can be performed by means of Oldenburg Matrix Test, QuickSIN or a standard Speech Audiometry.

The validation procedure can vary but it should also include accurately assessing the patient’s individual psychoacoustics and hearing aid needs. In addition, “AutoREM” does not close the door to the manual adjustment of the fitting, which can be performed afterward according to the patient's feedback.

For more information, check out these resources or visit www.inventis.it

Massimiliano received his specialization in Biomedical Engineering from Padua University, with a dissertation about the open fitting and correct speaker equalization for REM systems. At Inventis, he is the Project Manager of Trumpet, a light and portable REM device with PTA and speech audiometry capabilities, and of Drum, a reliable and solid HIT system.