February 19, 2001
Share:
Print
AO/Beck: Hi Dave. Thanks for spending time with me tonight.

Smriga: Hi Doug. Thanks for the opportunity.

AO/Beck: You're welcome. Let's start with a little background on you. When and where did you get your degree?

Smriga: I earned my master's in audiology in 1976 from Northern Illinois University.

AO/Beck: What about your history in the industry and the profession?

Smriga:My first job was in Winnipeg, Manitoba Canada, where I provided hearing care services to the adult population through the main city hospital. About 4 years later I joined the ENT department of the University of Manitoba and helped launch the first evoked response lab in Manitoba. In 1983, I accepted a position with Telex as a technical support person. Eventually I worked my way into marketing and worked as a product manager with Telex until 1988 or so. Then I went to Hearing Technology. They were a start-up and were doing very well, but then I was offered a national sales position with Danavox in 1989 and I have been with this group ever since.

AO/Beck: Dave, how large is the new GN ReSound group with regards to market share? And, what are the brand names they are going to carry into the future?

Smriga: We believe GN ReSound is the second largest supplier of hearing aids in the world in terms of market share. The brands currently within the GN ReSound Group's corporate umbrella include ReSound, Danavox, Viennatone and Beltone. There is also an instrumentation division that includes the Madsen and ICS brands. The ReSound and Danavox brands are marketed through GN ReSound. The Viennatone brand is marketed mostly in Europe. Beltone continues to market it's own brand globally.

AO/Beck: Is the acquisition stage over or will that continue?

Smriga: Well, that depends on what opportunites present themselves. Great Nordic (GN) is our parent company. They have invested in a variety of communications industries including hearing health care. Traditionally, when GN gets involved in an industry, they strive to be an influential and the dominant player in that industry. Although it's hard to predict the future, I think there may still be opportunities for GN ReSound to grow and for the industry to further consolidate.

AO/Beck: Dave, when you look at the international marketplace, how do sales figures across the world compare to the sales figures in the USA?

AO/Beck: What about the new hot spots in the far east? What type of activity are you seeing there?

SMRIGA: We have increased our sales and marketing presence in the far east recently and we anticipate growth in those markets. Of course there are other manufacturers who have established their presence in those locations too, so it appears that the time is right for rapid expansion in the far east.

AO/Beck: Do you believe the hearing aid market is flat? Or is there something else going on?

Smriga: I believe the overall market is flat. That is, the growth has slowed to a crawl and the potential is not being realized. The minimal growth we are seeing is due more to increased market size, with stagnant-to-decreased market penetration.

AO/Beck: Why do manufacturers and investors continue to pour money into an industry that appears to be flat?

Smriga: From a business perspective, many people look at this industry as a wonderful opportunity, specifically due to the low market penetration. In other words, the growth potential is staggering. The untapped possibilities are vast. However, from the professional viewpoint, we continue to be frustrated by our inability to influence significant growth. The messages we've sent to the marketplace regarding technological advances and professionalism don't seem to get as much attention as they deserve. From a consumer perspective, the whole thing is essentially a non-issue. That is, most of the target audience does not identify hearing loss as a big deal in their own personal daily lives.

AO/Beck: Well that all sounds very depressing! Nonetheless, if we assume it is all correct, and I think it is, what do we (as a profession and as an industry) do, to grow the market ?

Smriga: I think the key is better use of the media. We did a survey about a year ago within one of our domestic market segments, to gauge consumer's opinions about our presence in the media. 78 percent of the consumers surveyed responded that they didn't think the media was adequately covering hearing healthcare issues. They also indicated that TV was their most common source of news and information for healthcare information, followed by newspapers and magazines. The survey respondents indicated that the two most common topics they would like to learn more about were prevention and technological advancements. So that gives us some idea as to how approach consumer awareness. When you work with the media, you have to remember the story that gets aired is the story the media finds most interesting, not necessarily the story we want to tell.

AO/Beck: What about GN ReSound and their specific involvement with media issues?

Smriga: Our company has mounted a series of expert issues campaigns aimed at positioning GN ReSound as an information resource to the consumer through media coverage. Recently, we have been tackling the prevention aspect of hearing healthcare awareness. We were at the SuperBowl a few weeks back, along with the Audiology Awareness Campaign (AAC) giving away almost ten-thousand ear plugs. I think that's a good example of the type of message the media will pick up on and they'll air that "prevention" message both locally and nationally.

AO/Beck: So basically, you're saying we need to give the media information on prevention and technology, since that's what consumers want to learn more about, and then package that information in ways that attract media attention?

Smriga: Yes, I think that's the way to go.You can see some examples historically if you look at the early media coverage of products like the ReSound programmable, the Zeta Noise Blocker, the Innovaid and other technical "news" stories. These technology stories had appeal, and their publication created a demand for the devices and a surge in market penetration. That was true of tiny hearing aids as well. After President Reagan wore canal aids, there was a ground swell of interest from the public and a major surge in market penetration. So the media can be used to influence market penetration if the story is right. Prevention and technical advances are the stories consumers are interested in reading more about, We have to get the media more interested in telling those stories.

AO/Beck: So how do we capture the interest of the media?

Smriga: That's a tough question. Often, what you'll find is stories on high tech and similar products are viewed by the newspapers and the TV stations as advertisements! So, we need to get much more clever in how we package these stories for media consumption. It's a tough problem and we, as an industry and as a profession, need to attack it strategically. Additionally, we need to be pro-active. In the past, when the media has picked up on a hearing care story, which has not been initiated by us, they have traditionally been negative stories. Maybe what we need to do is build a trust relationship with the media, by not directly talking about what we want to talk about. In other words, start with what they want, the stories on prevention of hearing loss and stories on new technology, and then gradually the interest in hearing loss and technology may lead to the stories on hearing aids and hearing care. I think we've all tried to interest the media in hearing aids, but because those stories were not directly of interest to reporters, they went nowhere. Perhaps a "back door" approach would be more useful.

AO/Beck: Who do you see as the right person or group to take the lead on this issue?

Smriga: I think we all need to take the lead. That is, I think the care givers and the manufacturers as well as the national groups should identify the stories the media wants and let's all supply the media with those stories to develop the trend and fill the niche.

AO/Beck: OK, very good. Let's switch gears here a bit...When you think of the advent of digital technology as applied to hearing aids, and when you consider where we are as an industry, are you pleased with the state of the art?

Smriga: We have come along way very quickly. However, as an industry, we have not yet fully tapped into the capabilities that digital signal processing (DSP) presents to us regarding problem solving in hearing healthcare. As you know, the research is very expensive, and it is ongoing. There is no question in my mind that in the near future we will see more amazing options and more ability to reconstruct sounds for impaired ears with greater accuracy, more flexibility and better options and outcomes. So as far as the amount of time that DSP has been available, yes we've done a lot quickly. As far as our potential - we still have many opportunities which are as of yet untapped.

AO/Beck: I've heard many people say that the "digital advantage" is less than anticipated because so many of the DSP instruments are currently programmed with DSP versions of analog and digitally programmable fitting protocols. In other words, the question becomes...Why would you expect a big difference between a good digitally programmable hearing aid and a DSP, if they are both using NAL-R, or whatever the fitting protocols happens to be?

Smriga: That is indeed a good argument and a point well taken. I've heard it stated that many of the DSPs are using elegant duplicates of analog signal processing schemes. I am convinced that today's DSP products offer better solutions for hearing impairment that non-DSP products do. These benefits are not as subtle as some clinical data may imply. However, I don't believe that the core technology of DSP is yet fully utilized. We will create and incorporate far more sophisticated processing schemes which will maximize DSP capabilities. I think you'll see those starting to make their way to the market in short order. And when they do, even more dramatic performance results will become apparent. It is important to remember that today's DSP purchases are fueling the continued development of future DSP solutions.

AO/Beck: Any guesses as to what we might expect regarding DSP capabilities?

Smriga: Well, the capabilities are limitless. I am very excited about DSP's ability to reconstruct an input signal such as a voice, or another sound source, into a more appropriate acoustic form tuned for maximal utilization by an impaired ear. Stepping out of the amplitude adjustment only tool-box (more gain, less gain, compression, expansion) and working within the frequency and temporal aspects of sound reconstruction as well are where the most exciting DSP solutions will become evident.

AO/Beck: Dave, thanks so much for your time and knowledge this evening. I appreciate your insight on how to maximize the media and I certainly look forward to the further development of DSP regarding acoustic reconstruction.

Smriga: You're welcome. It's been a lot of fun and I thank you for the opportunity. 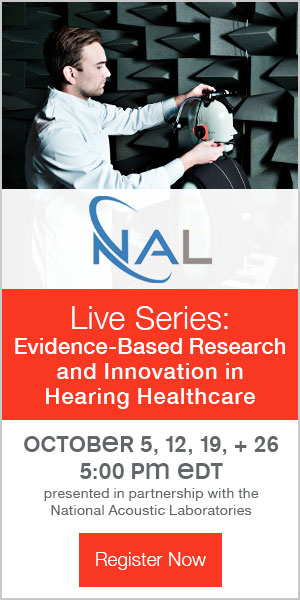 Founder and President of AuDNet, Inc.