Lessons in Laughter: The Life and Times of Bernard Bragg 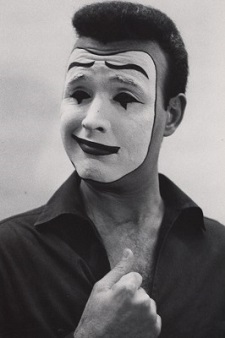 The world was his stage for deaf performer, playwright and director Bernard Bragg.

He dazzled audiences as the co-founder of the world renowned National Theater of the Deaf, performed in Moscow with a Russian theater group, studied with famous French mime artist Marcel Marceau in Paris, and was a visiting professor and artist-in-residence at Gallaudet University and the National Technical Institute for the Deaf at Rochester Institute of Technology.

More importantly, the 86-year-old Bragg who lives in Los Angeles was a lifetime friend to his mentor, Robert F. Panara, poet and pioneer of deaf studies at NTID who died last July at the age of 94.

Two students from RIT, Jean Pietrowski and Allison Thompson, became enamored with Bragg’s legacy—and with help from RIT Archive Collections—curated a memento-filled exhibition, “Lessons in Laughter: The Life and Times of Bernard Bragg,” at the RIT Museum space on the third floor of The Wallace Center. The show runs through April 10 and opens with a reception from 4:30 to 6:30 p.m. Thursday, Oct. 30—with guest speaker Aaron Kelstone, program director of NTID Performing Arts.

Pietrowski, who hails from Cottonwood Falls, Kan., and Thompson, from Champaign, Ill., are students in the museum studies program at RIT’s College of Liberal Arts and have worked internships in the RIT Archive Collections.

Together they created a 10-by-3-foot installation timeline of Bragg’s autobiographical achievements—from his days at New York School for the Deaf to his directorial debut in college at Gallaudet; his TV show, The Quiet Man, which aired in San Francisco from 1957 to 1963; his Broadway performances, world tours and being heralded by The New York Timesas “the leading professional deaf actor in the country.” Included in the exhibition are 50 historic pieces from the RIT Archive Collections that include photos, Broadway Playbills, letters, news clippings and travel notes.

“Going through Bernard’s collection, I just fell in love with him,” said third-year student Pietrowski. “I think it’s kind of hard not to—the man has been so many places, had so many experiences. He’s been all around the world and bridged gaps between many countries.

“Watching him sign is like a small religious experience; the way he moves is so expressive you can’t help but be entranced. He has done amazing things for the world, and I only hope he will continue to inspire coming generations to do the same.”

For Thompson, who will graduate next May with minor degrees in visual culture and American Sign Language and deaf cultural studies, Bragg’s journey was personally motivating.

“As a hard-of-hearing individual who is equally passionate about the arts and education, Bernard Bragg is a huge inspiration to me,” said Thompson. “Undeterred by adversity, he has helped light the way for deaf individuals around the world to follow their dreams through his performances and teachings. I am thrilled for the first exhibition I have co-curated to be one that honors his legacy.”

In 2006, the internationally acclaimed Bragg established a generous theater-arts commitment of $100,000 to NTID to establish the Bernard Bragg Deaf Theatre, Signed Arts, and Deaf Cinema Endowment Fund. The fund helps support scholarships, training, workshops and lectures related to deaf theater and cinema for deaf and hard-of-hearing students interested in the performing arts.