There are numerous listener benefits when listening to directional sound sources, including perceived improvements in the quality and clarity of sound. The HyperSound® Audio System uses ultrasonic technology to create sound in the air. HyperSound transmits a narrow beam of sound, which focuses an incident beam of sound in a direct path to the listener, unlike conventional audio speakers.  Recently, HyperSound became commercially available as a home audio device. In this study, the sound transmission characteristics of the HyperSound emitters were compared with conventional loudspeakers in an anechoic chamber. Designed to significantly diminish sound wave reflections in order to simulate a free field environment, the anechoic chamber provides an optimal environment to evaluate sound transmission characteristics. Subjects were placed in the path of the HyperSound narrow beam inside the anechoic chamber, and a sample of speech was projected from the HyperSound emitters. The same sample of speech was then projected from the conventional loudspeakers, with the subjects placed in the same positions. Comparisons were made of probe microphone measurements near the tympanic membrane of the subjects for speech samples projected by the HyperSound emitters and by the conventional loudspeakers.

Written informed consent was obtained from subjects using a consent form approved by the IRB board at the University of Memphis. A total of 20 human adult subjects participated in the evaluation of the HyperSound Audio System.  Ear-level probe microphone measurements were made in a 20’x20’x20’anechoic chamber. The Hypersound Audio System was placed in the test position, and test subjects were placed in a seated position directly in front of the Hypersound® emitters (0 degrees azimuth) at 4 feet from the emitters and at 8 feet from the emitters. Probe microphone measurements were made from the right and left ears of test subjects, and care was taken to place the probe tubing directly in ear canals in close proximity to the tympanic membrane. An otoscopic inspection was used to confirm the tubing placement in each subject. To evaluate the conventional loudspeakers, 17 human adult subjects participated and probe microphone measurements were completed with the subjects placed in the same positions corresponding to when the Hypersound Audio System was evaluated. The probe microphone system quantified peak sound pressure levels near the tympanic membrane in 1/12th octave bands from approximately 200 Hz to 8000 Hz. In addition, probe microphone measurements were made using the Knowles Electronics Mannequin for Acoustics Research (KEMAR). To determine the effects of body position on sound levels measured at the ear, KEMAR was positioned directly in front of the sound sources (at 0 degrees azimuth), with the right ear closest to the sound sources (at 90 degrees azimuth), and turned away from the sound sources (at 180 degrees azimuth) at a distance of 4 feet from the sound sources. Figure 1 illustrates the position of KEMAR at 0 degrees azimuth (Panel A, left) and 90 degrees azimuth (Panel B, right). 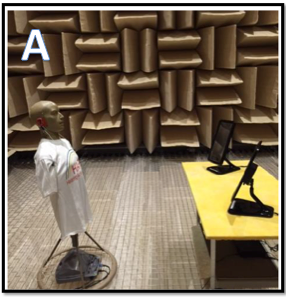 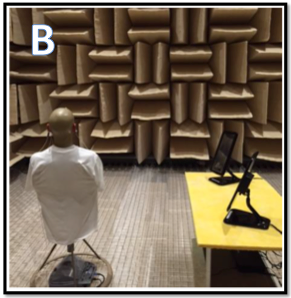 The speech stimulus presented to the subjects through the HyperSound emitters and conventional loudspeakers was the International Speech Test Signal (ISTS; Holube, Fredelake, Vleming, & Kollmeier, 2010). A calibrated Larson-Davis sound-level meter was used to measure ISTS levels in the anechoic chamber near the entrance of the ear canal of the test subjects. The outputs of the HyperSound emitters and the conventional loudspeakers were configured to produce ISTS levels at this position of approximately 70 dBA ± 3 (peak) as measured by the sound-level meter. This level was judged to be comfortable by the subjects tested in the anechoic chamber. 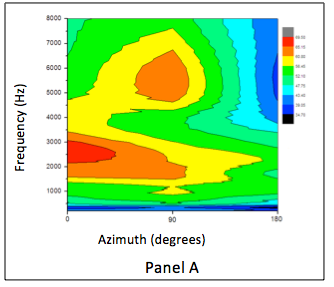 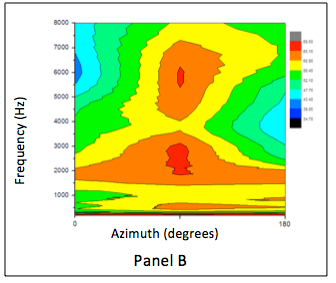 Figure 3 depicts the effects of distance on probe microphone measurements in the human adult subjects. 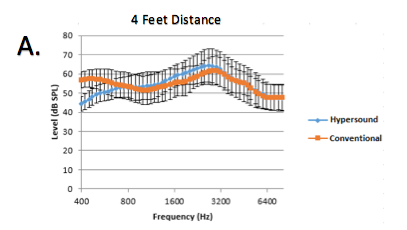 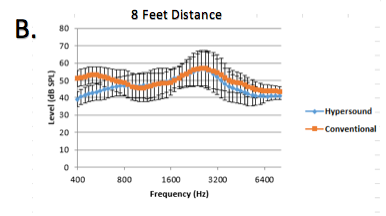 The effects of distance on probe microphone measurements in the human adult subjects indicated that within the confines of the anechoic chamber, HyperSound emitters produced output that decreased with increasing distance. However, the magnitude of these decreases in the lower frequencies was less for the HyperSound emitters than for the conventional speakers. The findings of this study provide objective evidence of the sound transmission characteristics of the HyperSound Audio System and conventional speakers in an anechoic environment.

This study was funded by a grant provided by the Turtle Beach Corporation. Portions of this report were presented as a poster session to the 42nd Annual Scientific and Technology Conference of the American Auditory Society in March of 2016.

Bhagat, S., Yellamsetty, A., & Taylor, B. (2016, November). A comparison of HyperSound and conventional loudspeaker transmission characteristics in an anechoic environment. AudiologyOnline, Article 18525. Retrieved from http://www.audiologyonline.com.

Shaum Bhagat, PhD, is an Associate Professor in the School of Communication Sciences and Disorders at the University of Memphis.

Anusha Yellamsetty is a PhD student in the School of Communication Sciences and Disorders at the University of Memphis. 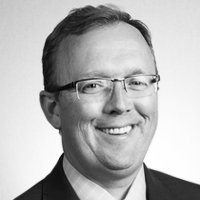 Brian Taylor is currently the Senior Director of Clinical Affairs at Turtle Beach/Hypersound. He is also the clinical audiology advisor for the Fuel Medical Group. In addition, he is an adjunct professor for A.T. Still University: Arizona School of Health Sciences, editor of Audiology Practices and section editor for the Hearing Healthcare and Technology Matters blog. Over the past decade, Dr. Taylor has held a variety of positions within in the industry, including stints with Unitron and Amplifon.

Brian has nearly 25 years of clinical and practice management experience. He has written four books, numerous articles and lectured extensively on a variety of topics related to clinical audiology, hearing aids and business management.