Over the past several years, the literature has demonstrated children with significant prenatal alcohol exposure may experience marked deficits (Church and Gerkin, 1988; Jones, Smith, Streissguth Barr, Sampson and Bookstein,1994; Lemoine, Harousseau, Borteyru and Menuet, 1968). In 1973, Jones and Smith recognized a cluster of characteristics exhibited by children of alcoholic mothers, which they subsequently termed Fetal Alcohol Syndrome (FAS). Since that time, numerous investigators have contributed to a list of characteristics commonly found in children with FAS. Some of those characteristics are a discrepancy between verbal performance and effective communication, difficulty with conversational skills (''shallow speech''), impaired social skills, inattention, and general learning difficulties (Abkarian, 1992; Institute of Medicine [IOM], 1996; Nanson and Hiscock, 1990; Streissguth, Aase, Clarren, Randels, LaDue and Smith, 1991; Wekselman, Speiring, Hetteberg, Kenner and Flandermeyer, 1995).

Dysfunction within the central nervous system (CNS) is among the sequelae of FAS (Clarren, 1982). Decreased cranial and cerebellar size at birth, partial or complete agenesis of the corpus collosum, cerebellar hypoplasia and various hard or soft neurologic signs have been identified in children with FAS (Connor and Streissguth, 1996; IOM, 1996; Riley, et al., 1995). Additionally, Rossig, Wasser and Oppermann (1994) identified dysfunctions attributed to the brainstem in some individuals with fetal alcohol exposure. Other studies suggested exposure to alcohol throughout pregnancy appears to relate to: (1) deficits in encoding and sequencing information presented visually and through audition (Coles, et al., 1991); (2) possible deficit in rate of central information processing (Jacobson, Jacobson and Skol, 1994; Jacobson, Jacobson, Skol, Martier and Ager, 1993); and (3) slowed rate of information processing and difficulty retaining information, focusing, maintaining attention, and organizing information (Streissguth, Barr, Sampson and Bookstein, 1994).

Given this background (above) information, it is not that surprising descriptions of listening and conversational skills of children with FAS are remarkably similar to descriptions of listening and conversational skills of children with CAPDs. Abkarian (1992) asserted that individuals with FAS often appeared to demonstrate more difficulty with comprehension and listening skills than with expressive language skills. Streissguth, et al., (1991; 1996) stated individuals with FAS generally have IQ scores in the low average range. Taking into account Keith's (1995) prerequisites of normal hearing and normal intelligence for a diagnosis of CAPD, it is possible the communication weakness in some individuals with FAS may be associated with CAPD.

The present study compared the performance of children diagnosed with FAS to age matched children without FAS, across five selected measures of central auditory processing.

Sixteen children aged six to eleven years participated in this study. Eight of the children were diagnosed with FAS by the medical geneticist at the University of North Dakota School of Medicine. All of the children lived in either foster or adoptive homes at the time of testing. Children selected as controls were chosen from the same community or a similar urban center as the children with FAS and were matched within seven months of age. A hearing screening and tympanometry were completed to rule out hearing loss and/or middle ear pathology. The Comprehensive Test of Nonverbal Intelligence (TONI-2; Brown, Sherbenou, & Johnson, 1990) was administered to each child to ensure nonverbal intelligence was within normal limits.

A graduate student in Communication Disorders tested each child under the supervision of a certified and licensed Audiologist/Speech-Language Pathologist. Each child was administered the SCAN: A Screening Test for Central Auditory Processing Disorders (SCAN; Keith, 1986), the child version of the Pitch Pattern Sequence (PPS; Auditec recording) and the Duration Pattern Sequence (DPS; Auditec recording). The tests were administered in random order to the children with FAS. The children in the control group were given the tests in the same sequence as their age-matched peers in the group with FAS.

RESULTS:
Dependent t-tests were used to compare the TONI-2 scores of the children with FAS to their age matched peers without FAS. The results from the dependent two tailed t-tests demonstrated the matched pairs did not show a great amount of variability. This suggested the subjects performed reasonably similar on this measure of nonverbal intelligence (see Table 1).

Independent t-tests were used to compare the overall mean scores of the two groups on the TONI-2. The two groups had similar variability on the TONI-2 scores, again suggesting subjects and controls were reasonably well matched on scores of nonverbal intelligence (see Table 2).

Table 3 shows the results for the dependent one-tailed t-tests performed on the CAP tasks. The individuals with FAS scored significantly lower (p 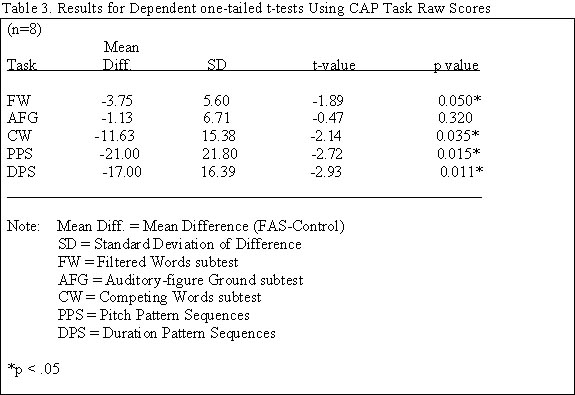 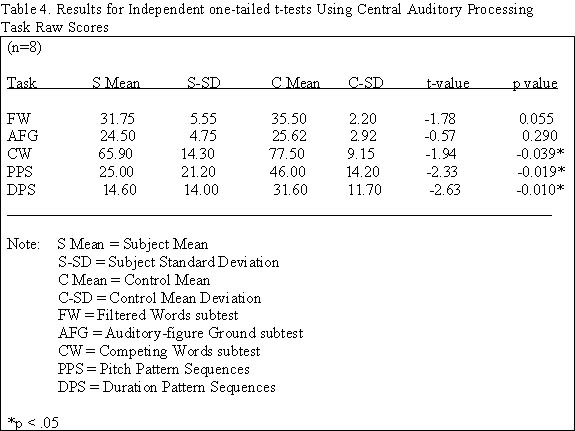 These results invite interesting speculations. It has been suggested the tests used in this study may be associated with specific CANS lesions. Several studies have linked poor performance on CW, PPS and DPS tasks with underdevelopment or slower maturation of the auditory system, deficiencies in either hemisphere, damage to the corpus callosum, and damage to the temporal lobe (Keith, 1986; Bellis, 1996; Chermak and Musiek, 1997; Keith, 2000). Damage to these areas has also been associated with FAS. Rintelmann (1985) summarized numerous studies examining the effects of site of lesion associated with filtered word tasks. Performance on FW tasks was not significantly diminished in patients with damage to the interhemispheric auditory pathways of the corpus callosum.

Suspected neurological damage of the children with FAS in this study did not consistently interfere with FW and AFG tasks, but apparently diminished performance on CW, PPS and DPS tasks. The CW, PPS and DPS tasks included the additional demands for memory, cognition and language, as well as the coordination of these processes. Possibly, damage from FAS diminishes these processes, their coordination, or the combination of the processes and their coordination in tandem.

Regardless of neurological explanations, deficits in CW, PPS, and DPS skills have significant effects on receptive and expressive language skills, social interaction, and academic success. Children with deficits in pitch pattern and duration pattern tasks will obviously have difficulty understanding intonation and inflection. This will subsequently create difficulty understanding jokes, sarcasm, indirect directives and other common language forms, as well as difficulty with reading, spelling and writing skills. It is very difficult to read and spell efficiently when one cannot recognize stress and inflection of syllables, phrases and/or sentences.

It is noteworthy that children with FAS were able to withstand degradation of the acoustic stimuli on the FW and AFG tasks. Since there were no differences identified between groups in performance on these tasks, it is evident that enough integrity was maintained in the acoustic signal as it passed through the central auditory nervous system (CANS) and a significant disruption did not occur.

The performance of children with FAS on the five tasks of this study supports the idea of ''scattered'' auditory skills. Children with FAS are often able to perform well in some auditory environments such as understanding muffled speech or speech in noise. However, they may have more difficulty with other auditory tasks such as integrating auditory information into language. This is manifest in assimilating the components of pitch and duration as well as understanding language in the presence of competing speech. This discrepancy may give teachers, parents and interventionists the false impression ''listening skills'' may be ''selective,'' or possibly intermittent.

This study suggests children with FAS demonstrate many behaviors consistent with CAPD. Therefore, central auditory processing skills must be evaluated in children with FAS in order to assess and provide effective and appropriate intervention. Management strategies may need to focus on skills related to competing words, pitch and duration patterns. A few examples of intervention areas related to deficits in CW, PPS and DPS are interhemispheric transfer tasks, use of strategies to improve organization of speech, language and general information, and direct training with the prosodic features of speech and language. Additionally, direct training on discrimination of duration and pitch differences of speech sounds, words, phrases and sentences may be necessary. Gillet (1993), Bellis (1996), Chermak and Musiek (1997), and Masters, Stecker and Katz (1998) provided many suggestions for remediation of deficient central auditory processing skills.

Additional research regarding CAP skills in children with FAS is necessary before permanent conclusions are drawn. Further investigation of left and right ear differences in children with FAS may provide information regarding hemispheric strengths and deficits. Investigation of children and adults affected by prenatal alcohol exposure with classifications other than FAS would be helpful in broadening the application of the present results. Additional studies, focusing on the educational and intervention process with these individuals, will be beneficial. 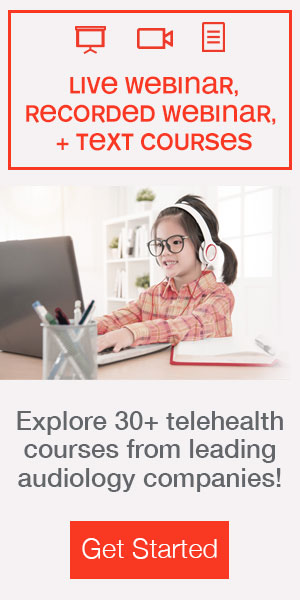 1 https://www.audiologyonline.com/audiology-ceus/course/grand-rounds-pediatrics-nemours-35435 Grand Rounds: Pediatrics, presented in partnership with Nemours Alfred I. duPont Hospital for Children This course features clinicians from the Nemours/Alfred I. duPont Hospital for Children presenting actual case studies on amplification and assessment with a range of audiological and medical diagnoses represented. auditory, textual, visual

ABR: An Illustration of Auditory Dysfunction Through Clinical Cases, Presented in Partnership with Rush University

5 362
362 Reviews
AAA/0.1 Intermediate; ACAud/1.0; BAA/1.0; CAA/1.0; Calif SLPAB/1.0; IHS/1.0; Kansas, LTS-S0035/1.0; NZAS/1.0; SAC/1.0
View CEUs/Hours Offered
This session presents several typical cases seen in an urban medical center clinic that depict the effects of common abnormalities along the auditory pathway on the ABR waveform. It examines how outer, middle, and inner ear dysfunction; auditory neuropathy; and brainstem dysfunction influence the characteristics of the ABR and other auditory tests by a basic review of clinical cases.
Course Details
3 https://www.audiologyonline.com/audiology-ceus/course/deafness-with-autism-psychological-perspective-23772 Deafness with Autism: A Psychological Perspective (Part 1) Part one of a series, participants will review normal developmental milestones for socialization, behavior and communication. An overview of autism will follow to help professionals understand the characteristics of autism, diagnosis of autism, and how autism could be mistaken for deafness. auditory, textual, visual

5 183
183 Reviews
AAA/0.1 Intermediate; ACAud/1.0; AG Bell - LSLS/1.0 Domain 4; BAA/1.0; CAA/1.0; Calif SLPAB/1.0; IBCCES/1.0; IHS/1.0; IL EITP/1.0; Kansas, LTS-S0035/1.0; NZAS/1.0; SAC/1.0
View CEUs/Hours Offered
Part one of a series, participants will review normal developmental milestones for socialization, behavior and communication. An overview of autism will follow to help professionals understand the characteristics of autism, diagnosis of autism, and how autism could be mistaken for deafness.
Course Details
4 https://www.audiologyonline.com/audiology-ceus/course/deafness-with-autism-psychological-perspective-23773 Deafness with Autism: A Psychological Perspective (Part 2) This presentation will explore the dual diagnosis of deafness with autism, help professionals understand the early signs and characteristics of autism in deaf children, and review some of the research in this area. An overview of the overlap of symptoms and the unique features of relatedness, communication and behavioral characteristics when deafness coexists with autism will be presented. auditory, textual, visual

4 154
154 Reviews
AAA/0.1 Intermediate; ACAud/1.0; AG Bell - LSLS/1.0 Domain 4; BAA/1.0; CAA/1.0; Calif SLPAB/1.0; IBCCES/1.0; IHS/1.0; IL EITP/1.0; Kansas, LTS-S0035/1.0; NZAS/1.0; SAC/1.0
View CEUs/Hours Offered
This presentation will explore the dual diagnosis of deafness with autism, help professionals understand the early signs and characteristics of autism in deaf children, and review some of the research in this area. An overview of the overlap of symptoms and the unique features of relatedness, communication and behavioral characteristics when deafness coexists with autism will be presented.
Course Details
5 https://www.audiologyonline.com/audiology-ceus/course/assessing-auditory-functional-performance-goals-33024 Assessing Auditory Functional Performance: Goals and Intervention Considerations for Individuals with Hearing Loss Functional auditory assessment and continuing assessment is critical in order to determine the current level of function, develop appropriate goals for intervention, and achieve maximum outcomes. Learning to listen drives everything else: speech intelligibility, language competence, reading, academics, and life-long learning. This course offers a detailed look at functional auditory assessment and intervention, to provide audiologists with a better understanding of hearing loss in children in terms of the broader speech, language, learning and academic contexts. Additional videos to demonstrate key points will be included. auditory, textual, visual