"Hearing impairment is an invisible handicap, yet its effects upon one's personal health, happiness, and personal well-being are very real."

The adult children of 87 year-old Anna Smith were concerned about her mental health. She lived alone. Although no major mishaps occurred, they were concerned she was becoming reclusive and depressed. At family gatherings she kept to the side and didn't' participate in conversations. Family members attempted to include her, but her responses were inappropriate and off-subject. Family members were embarrassed to keep trying. Her family physician placed her on anti-depressant medication. The medication caused her to be anxious and she stayed awake all hours. Anti-anxiety medication was added. She was soon referred to a local psychiatrist. The psychiatrist administered the Mini Mental State Examination (MMSE) battery, on which she scored 10 errors, indicating moderate Alzheimer's disease (AD). Her children were distraught over the diagnoses, but concluded based on their observations and the doctors,' that Alzheimer's was apparent. Plans were made to take Power of Attorney for her real and personal assets and she was admitted to a nearby nursing home.

An ongoing and pervasive lack of public and professional awareness regarding the importance of ruling out hearing loss and auditory disorders prior to diagnosing Alzheimer's disease is apparent.

For example, in The Caregiver Handbook (Area Agency on Aging, 2004), an otherwise excellent publication regarding management advice and related information for those suffering with dementia, there is no mention of audiology, audiologists, hearing aids, hearing specialists, hearing impairment or the cognitive effects of undiagnosed and uncorrected hearing loss. The section titled "Communicating with someone who has dementia" reads just like instructions for communicating with someone with severe hearing impairment.

Likewise, graduate-level textbooks dealing with memory, cognition, geriatrics and eldercare fail to relate the link between cognitive function in older adults and auditory disorders (Schultz & Salthouse, 1999; Matlin, 2002). From public to professional, from diagnosis to treatment, and from government regulatory agencies to research institutions, the likely and reasonable examination and exploration of hearing loss, as an undiagnosed, pre-existing condition in patient's suspected of having Alzheimer's disease, appears non-existent.

AD is enormously difficult to diagnose for even the best trained professionals. In 1996, researchers at Columbia-Presbyterian Hospital, in a post-mortem investigation of patients previously diagnosed with AD, found a 45% misdiagnosis rate (Alzheimer's Foundation, 2005). In addition, normal age-related cognitive changes have been implicated in cases of misdiagnosis and overdiagnosis of AD, signaling the need for better, more accessible, cost-effective diagnostic methodologies (National Institute on Aging, 2002).

But, just as an auditory evaluation was lacking in the vignette above, it is absent in most cases of AD (Chartrand, 2001b; Ullman et al, 1989; Peters, Potter, and Scholar, 1988). Other cognitive conditions, such as depression, anxiety and anti-social behaviors caused by previously undiagnosed and uncorrected hearing loss have been documented in the literature (Chartrand, 2001a).

In the above vignette, which represents a typical scenario, hearing status was not considered, or was disregarded by family and health professionals, each of whom made decisions critical to the well-being of Mrs. Anna Smith.

The thesis of this paper is that any/all thorough and comprehensive clinical assessments regarding cognitive function in older adults must begin with a thorough and comprehensive audiometric evaluation, by a licensed audiologist. Furthermore, if an auditory deficit is found, aural rehabilitation should be facilitated before a true and valid assessment of cognitive function can be rendered (see Figure 1).

Figure 2 (below) demonstrates the prevalence of hearing impairment in the different age-groups. Hearing impairment becomes quite concentrated in the older population. For example, 36% of the population between 65 and 84 years of age have hearing loss, whereas 66% or more of those age 85 years and above have hearing loss (Aural Rehab Concepts, 2000). The aging of America continues unabated, with those 85 years and older making up the fastest growing demographic age group (U.S. Census Bureau, 2005).

The prevalence of hearing loss and AD in the general population track similarly in age-group distribution (see Figure 3 below).

Figure 3. Prevalence of AD in the various age-groups.

As is evidenced above (see figures 2 and 3) as aging occurs, the probability and incidence of AD and hearing loss increase. Importantly, these are not mutually exclusive factors. The probability that the two conditions are co-morbid contributors to an individual's possible disability increase with age.

Mental health professionals should ascertain the auditory status of the older adult before deriving a diagnosis or proceeding with treatment of/for cognitive/memory disorders.

To accomplish a thorough and comprehensive audiometric evaluation on suspected Alzheimer's disease patients, the following steps may serve as a template:

Figure 4. Though AD patients come through varying referral "doors" the ultimate pathways for assessment and treatment should vary little.

Each situation and each patient is unique and no one model serves to address all possible presentations, management options and outcomes.

However, the point has been made that many potential AD patients, particularly the most aged, are highly likely to have demonstrable hearing loss requiring diagnostic audiology tests and audiologic intervention. Attending to audiologic issues prior to diagnosing AD, makes intuitive sense and potentially leads to far better outcomes for all concerned.

About the author...
Max Stanley Chartrand serves as managing director for DigiCare Hearing Research & Rehabilitation. He is profoundly deaf and utilizes a cochlear implant. As a widely published author and educator in the hearing field he brings unique insights into the assessment and treatment of the hearing impaired. Contact: (719)676-3277 or by email at www.digicare.org

Adviware, (2005). Misdiagnosis of Alzheimer's Disease. Retrieved on May 28, 2005, from www.wrongdiagnosis.com/a/alzheimers_disease/misdiag.htm

Alzheimer's Foundation, (2005). Cognitive Impairment Common in Older People and a Risk Factor for Dementia. Retrieved on May 29, 2005, from www.alzfoundation.com/news2.htm

Aural Rehab Concepts, (2000). Prevalence of hearing loss by age-group in the United States. Retrieved on May 27, 2005, from www.digicare.org

Kaufman, A.S., and Kaufman, N.L., (1992). Kaufman Adolescent and Adult Intelligence Test. Retrieved on May 5, 2005, from alpha.fdu.edu/psychology/kait.htm

National Institute on Aging, (2002). Progress Report on Alzheimer's Disease 2001. Retrieved on May 25, 2005, from www.alzinfo.org/research/diagnosis/default.aspx

Reinecke, M. (1977). Double-blind comparison of vincamine and placebo in patients with presbyacusis (author's transl) [Article in German]. Arzneimittelforschung., 27(6a), 1294-1298. 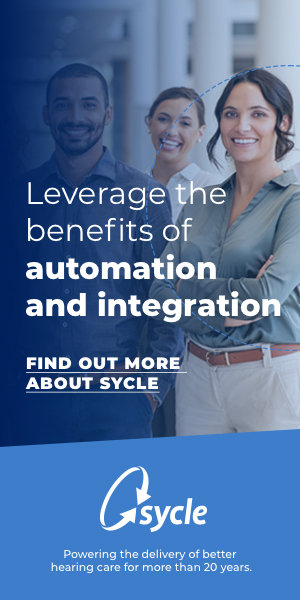 Max Stanley Chartrand serves as Director of Research at DigiCare Hearing Research & Rehabilitation, Rye, CO, and has served in various capacities in research and development and marketing in the hearing aid and cochlear implant industry for almost 3 decades. He has published widely on topics of hearing health and is the 1994 recipient of the Joel S. Wernick Excellent in Education Award. He is currently working in the Behavioral Medicine doctoral program at Northcentral University. Contact: chartrandmax@aol.com or www.digicare.org.

1 https://www.audiologyonline.com/audiology-ceus/course/connection-between-hearing-and-overall-35243 The Connection Between Hearing and Overall Health Research has linked physical health to the prevalence of hearing loss, and the prevalence of hearing loss to cognitive health. As hearing healthcare professionals, it is important to understand these relationships from the aspect of counseling patients on the impact of lifestyle on hearing and the benefit of hearing aids on listening lifestyle and satisfaction. auditory, textual, visual

The Connection Between Hearing and Overall Health

5 611
611 Reviews
AAA/0.1 Introductory; ACAud/1.0; AHIP/1.0; ASHA/0.1 Introductory, Professional; BAA/1.0; CAA/1.0; Calif SLPAB/1.0; IACET/0.1; IHS/1.0; Kansas, LTS-S0035/1.0; NZAS/1.0; SAC/1.0
View CEUs/Hours Offered
Research has linked physical health to the prevalence of hearing loss, and the prevalence of hearing loss to cognitive health. As hearing healthcare professionals, it is important to understand these relationships from the aspect of counseling patients on the impact of lifestyle on hearing and the benefit of hearing aids on listening lifestyle and satisfaction.
Course Details
2 https://www.audiologyonline.com/audiology-ceus/course/cbd-and-essential-oils-for-34543 CBD and Essential Oils for Hearing Loss, Tinnitus and Balance Disorders This course addresses the increased interest in cannabidiol (CBD) oil for hearing loss, tinnitus and balance disorders in addition to addressing the use of essential oils for the same auditory/vestibular issues. Patient counseling strategies are discussed. auditory, textual, visual

5 212
212 Reviews
AAA/0.1 Intermediate; ACAud/1.0; AHIP/1.0; ASHA/0.1 Intermediate, Professional; BAA/1.0; CAA/1.0; Calif SLPAB/1.0; IACET/0.1; IHS/1.0; Kansas, LTS-S0035/1.0; NZAS/1.0; SAC/1.0
View CEUs/Hours Offered
The participant in this course will understand the extended candidacy criteria with cochlear implantation and expectations. The course will cover implanting under age one, hybrid hearing with cochlear implantation, CI under local anesthesia, single-sided deafness, cochlear implantation, and auditory brainstem implantation.
Course Details
5 https://www.audiologyonline.com/audiology-ceus/course/conductive-mixed-hearing-loss-otosclerosis-34564 Conductive/Mixed Hearing Loss: Otosclerosis and Other Causes This course will review middle ear mechanics and conductive hearing loss. A highlight of differences and similarities between conditions will be discussed. A review of audiological and otological work-up will be covered and as well as a brief introduction to surgical and non-surgical treatments. auditory, textual, visual

5 773
773 Reviews
AAA/0.1 Intermediate; ACAud/1.0; ASHA/0.1 Intermediate, Professional; BAA/1.0; CAA/1.0; Calif SLPAB/1.0; IACET/0.1; IHS/1.0; Kansas, LTS-S0035/1.0; NZAS/1.0; SAC/1.0
View CEUs/Hours Offered
This course will review middle ear mechanics and conductive hearing loss. A highlight of differences and similarities between conditions will be discussed. A review of audiological and otological work-up will be covered and as well as a brief introduction to surgical and non-surgical treatments.
Course Details